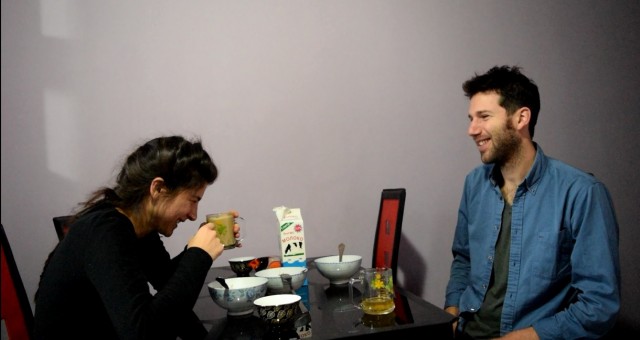 As the sun came up on our third flight and revealed the sparse, wintery landscape of Central Asia, the idea finally started to sink in: we’re on our way to Kyrgyzstan not for a week or a month, but to live. A day later we’re still getting used to the idea, but at least we’re 24 hours closer to understanding our new home.

We were still thanking our lucky stars that all of our four giant suitcases had arrived undamaged when we exited the airport into a small crowd of smoking taxi drivers. You couldn’t say they weren’t nice–some were a bit pushy–but we did have a small argument because we wanted to take an official taxi, it being our first day in the country and all. It turned out to be a good choice because our driver, a Kurdish man who’d lived here 23 years, eventually found us a place to stay after our Plan A and Plan B fell through. He also gave us SIM cards (which won’t fit our phones, but it was a very nice gesture).

Comfortably situated in a cozy studio apartment with heated floors and highly reflective ceilings, we charged our American electronic devices and freshened up before introducing ourselves to our new city.

Outside was cold, but not unbearably cold. The standard form of dress seems to be a navy-blue down coat, black boots and a thick winter hat, so at least in this season it wasn’t hard to fit in. We navigated our way through central Bishkek’s grid, following locals when we were forced to cross one of the frenetic avenues, eventually arriving at Ala-Too Square.

Bishkek’s main square was nearly empty, but the two guards were still at their posts in front of the statue of Aykol Manas on his horse. We were too cold to stay for the Changing of the Guard, which takes place every hour during winter, and I was impressed that the two young soldiers were able to maintain their positions for so long–frozen inside and out, I’m sure. 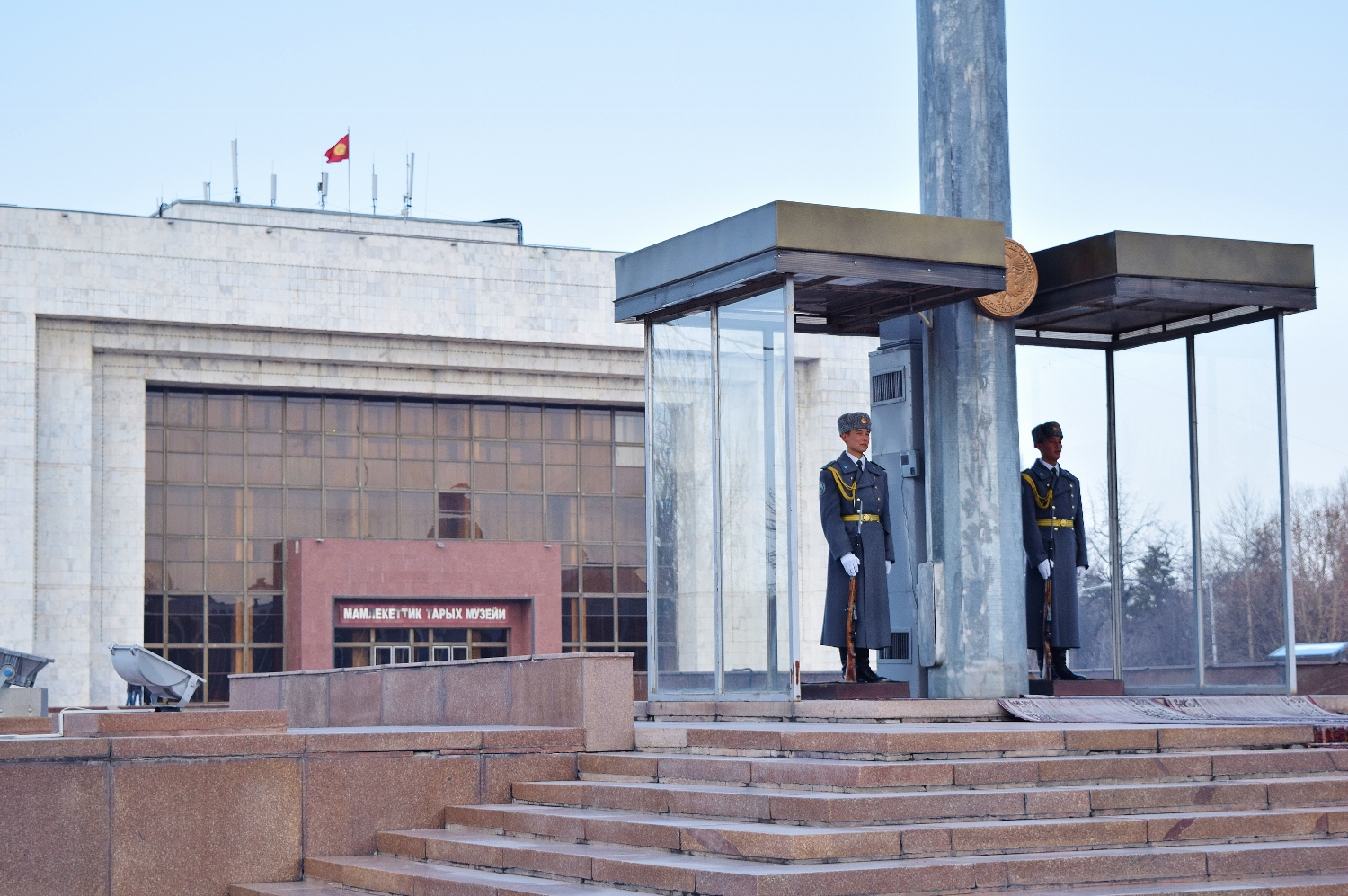 The guards at Ala-Too Square 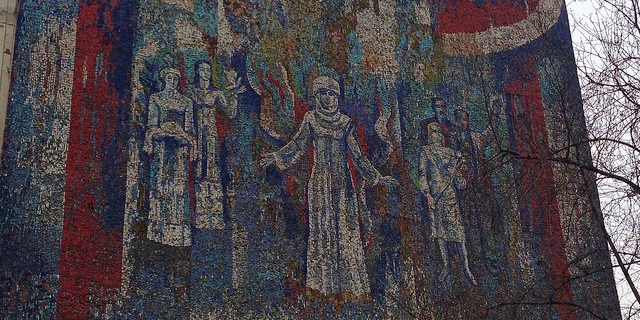 Mosaics on a wall in Bishkek

Craving lunch, we followed a picture of manty (meat dumplings) into what turned out to be a pizza and sports bar with a “Pele” theme. Given its location, it’s no surprise that it was on the higher end of food prices. Still, fresh off a plane from San Francisco, the sub-$4 main dishes and $1 beers seemed cheap. Most importantly, it was delicious. Our stir fry and fried dumplings were cooked just right and with just the right spice combination that was just unique enough to remind us that we’d never been here before.

On the way back home, we made a pit stop at a small market to pick up dinner and price the local produce. We discovered, among other things, that we’ll be eating a lot of carrots and not too many tomatoes. The best thing about the market, in my opinion, is the assortment of prepared salads on offer, from shiitake mushroom to eggplant and carrot, and a wide variety of pickled vegetables. I can’t wait to methodically consume each one–possibly all in one sitting.

The dinner we got was fated to stay in the refrigerator that night. We tried our best to stay awake until a more normal hour, but we were both sound asleep by 7:30PM with no hope of return. We were tired from our 37-hour journey, but we were also satisfied and comfortable, glad to finally be home–even if that home was Bishkek, Kyrgyzstan, literally halfway around the world from our last apartment. I think the heated floors had something to do with it too. 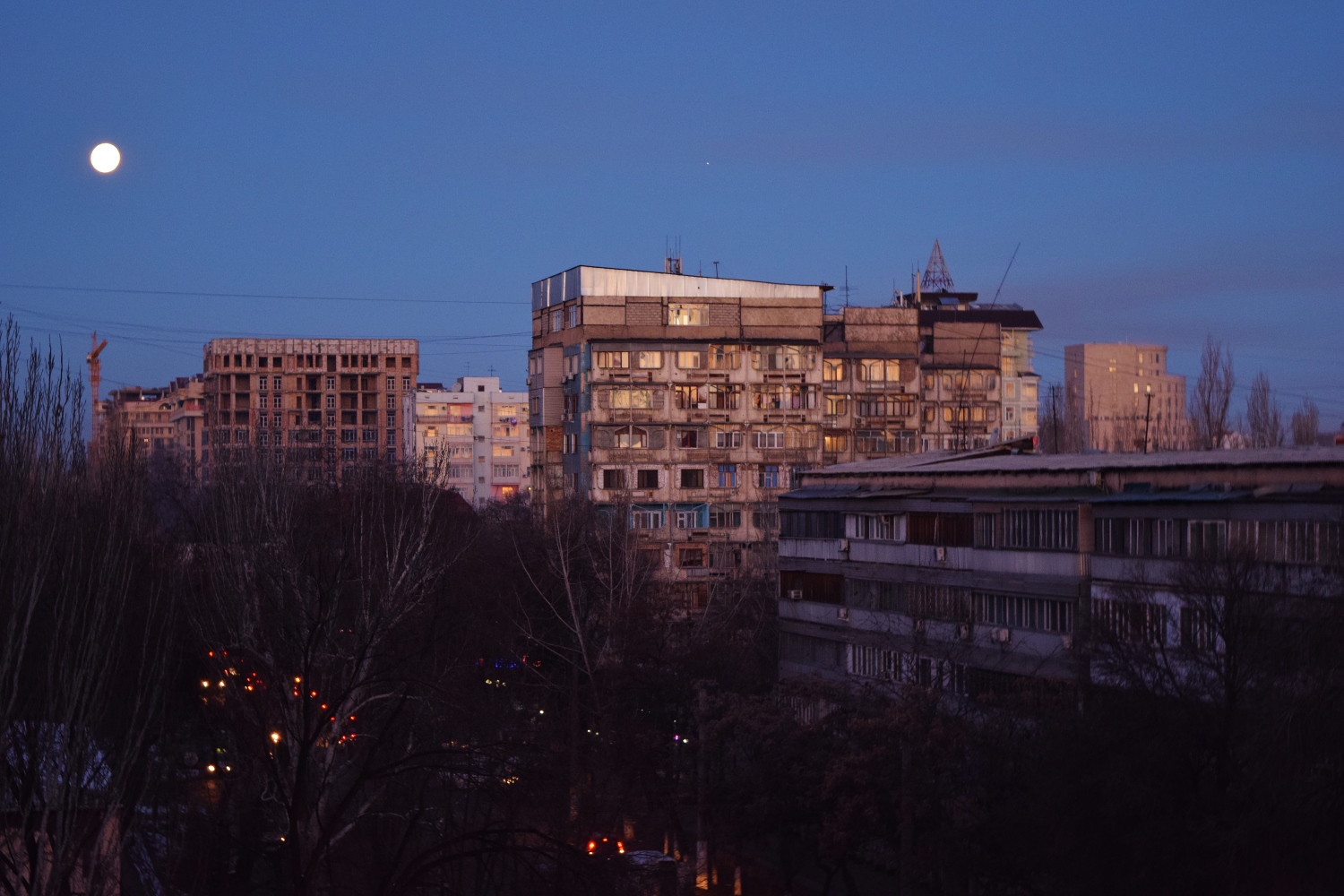 The view from our apartment

Visa
This was actually not a challenge at all. Stephanie had arranged for a student visa through The London School in Bishkek, which provided the service with only a verbal intention to take courses. She paid $70 for the visa at the airport, which she can renew later through the language school. [CORRECTION: that “visa” thing didn’t quite pan out.] I, on the other hand, am here on a simple tourist visa. As an American, I didn’t have to pay anything and I can stay in the country for up to 60 days (according to the Department of Something or Other on 58 Kievskaya Street). My visa isn’t renewable, meaning that I will most likely have to leave the country and come back to start a new 60 days/or apply for a long-term visa. From what I’ve heard, there’s no “60 or something days out of 180 days”-type rule (which applied to us when we previously lived in Hungary, which is within the Schengen area), and the Kazakh border is just a couple hours away so I can easily go for a visa-renewing weekend getaway in Almaty.

Accommodation
We were able to book a double room in a guesthouse over the internet, but the address was incomplete and our taxi driver was unable to reach the owners. Our Plan B was a larger guesthouse recommended by Lonely Planet. We found it, but it was closed for the season. The driver explained that this is relatively common, since not many tourists come to Bishkek in the winter and hostels cut down on overhead by just shutting down for a couple months. If your budget is more adult, the standard hotels–both local and international chains–are in business year-round. Thanks to our savvy driver everything turned out OK–but the moral of the story is definitely make sure your hosts confirm your reservation before you get here.

Language
If you speak Russian, you’ll be fine. If you don’t speak Russian (let alone Kyrgyz) you’ll have some trouble communicating. The woman at the airport who helped with our visas spoke English, but after that I’ve only heard a few words here and there, like “howareyoumyfriend,” and “big money, big money.” I was surprised that even at the relatively upscale restaurant where we had lunch the young servers didn’t speak any English. That said, Bishkek hosts several language schools that offer intensive Russian courses for around $5 per hour.

View our Flickr album for photos from Bishkek: Day One. 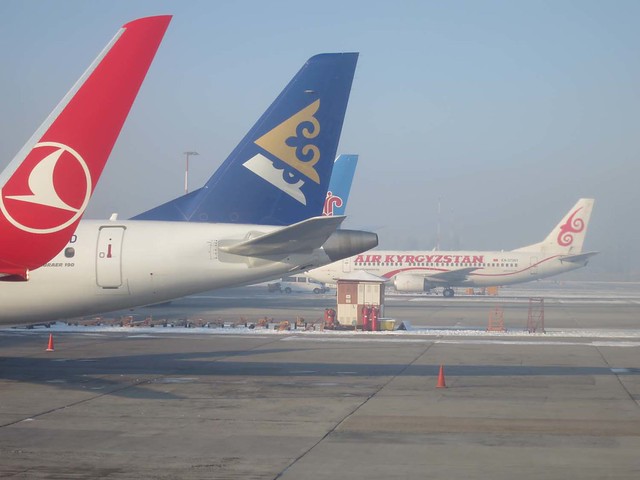