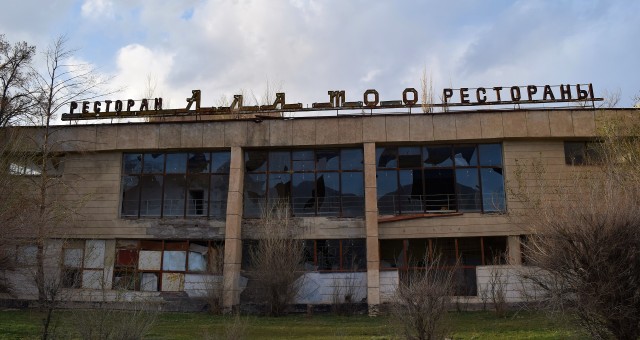 This is how Lonely Planet introduces the town of Naryn:

“Mostly wedged into a striking if slightly foreboding canyon, Naryn is an architecturally unlovely strip town with no real ‘sights’ beyond a typical local museum…”

“Naryn is described as the poorest region in a country which is now among the poorest of the former Soviet states. This means exactly what it says: not good. Other perks include that Naryn is also the coldest city of Kyrgyzstan. To make things worse, our guidebook noted that Naryn, which was apparently established around a former Soviet-era garrison, is a place people don’t visit by choice.”

Wow, sure makes you excited to go there… but wait. Can it really be that bad?

I spend a lot of time in Naryn Oblast for work. I travel throughout the region visiting schools, basically going from one rural, mountain village to the next. I often stay in the town of Naryn—the capital of the namesake oblast—because it’s a central location and I love the wifi and toilet at my beloved Community Based Tourism guesthouse (yes, I specifically mention the toilet because it’s literally the only one I’ve experienced in the whole region). Yeah, the town’s not exactly visually stunning and the brown canyon backdrop is kind of depressing, but cut Naryn some slack! This is really a great little town to explore if you’ve got the right attitude.

Here’s an aerial view of Naryn:

Doesn’t seeing it from above make it just a little bit cooler? The town is bounded by the Naryn River and canyon walls to the north, and mountains the south. The main street, Lenina St., crosses the entire town from east to west, and the charming blue-tiled Central Mosque is an easy orientation marker that can be seen from anywhere.

My favorite area to explore is the southern end of town. From the Central Mosque, walk south towards the mountains and eventually you’ll run into a small stream with a walking path next to it. The stream starts almost at the base of the mountain, so this area is higher than the rest of the town. It’s really quiet, fresh air, and offers nice views. If you want to get back to town, simply walk downhill and you’ll be in the center in 15 minutes.

I like to follow the river east, because this eventually leads to the abandoned meat processing plant (circled in yellow in the aerial view). I like exploring abandoned places.

Behind the plant, a little further uphill, is a cemetery. I also think Kyrgyz cemeteries are really interesting. If you don’t like abandoned places or cemeteries, you can just have a look because behind the cemetery you’ll find several walking paths that lead into the mountains. These are the closest walking paths I’ve found that are easily accessible from the town center, and they offer a nice way to spend an afternoon.

If you’re expecting classy restaurants, vibrant nightlife or architectural charm, the town will indeed be disappointing. But if you’ve got a curious side and keep an open mind, you can easily have a great time in Naryn!