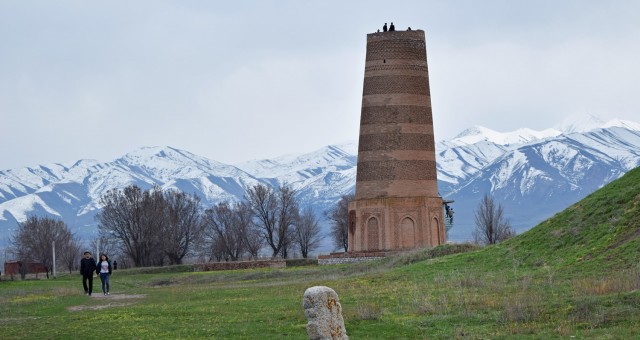 One Spring-like Saturday in April we decided to see what all the buzz was about and head to Burana Tower, located in a small town just east of Bishkek. We took a city marshrutka to the Western Bus Station, where we transferred to a longer-haul marshrutka heading to Tokmok. 45 minutes later, we arrived.

The marshrutkas stop a couple kilometers outside of what you might call the central Tokmok. You’ll know you’re in the right town because they tell you with a 3-story monument. Not to be bested, an older monument across the street proudly displays 10-meter-high wooden flags attesting to Kyrgyzstan’s awesomeness.

We were hungry when we got in so we got directions from a pedestrian and hiked toward the town center. In all honesty, we’re not sure if we every got there, but we did notice a higher concentration of convenience stores and cafes as we passed a mounted airplane and a quiet amusement park. We found a quiet, outdoor restaurant and feasted on Kyrgyz-Chinese fare before hitting the streets of Tokmok to take in the atmosphere.

Around the corner from the restaurant we found a residential area, relatively alive with local kids (most likely owing to the unseasonably warm weather), but still displaying the characteristic bleakness of a Winter in remission.

As we continued on, houses and fenced yards gave way to a vast, open space that seemed to extend to the horizon. With a few shepherds tending their flocks, a shimmering stream passing through, and mounds of green grass between evergreen groves, the location would have been idyllic–if it wasn’t also littered with the droppings of at least 3 mammal species.

Nearby, we met a friendly group of local kids who greeted us with shouts of “hello” and “heil Hitler.” We don’t think they really meant the last one. It turns out they were also familiar with Michael Jackson.

Having explored Tokmok to our satisfaction, we found a taxi who offered to take us to Burana for 300 som, which is less than half what we’d read in guide books. For no extra charge, he agreed to stay and wait for us to explore the iconic Burana Tower. The village of Burana is about 8km from Tokmok, and the tower is visible from several kilometers away, standing tall above the flat plains and farmland.

Our first thought was “why here, in the middle of absolutely nothing?” But the truth is that in the 11th century this was the thriving center of the town of Balasagyn, itself a vital hub on the Silk Road. Even the tower–first constructed as a minaret–was nearly twice as tall in its heyday, until an earthquake in the early 1900s claimed its topmost 20 meters.

Today, not much remains of the town outside this reconstructed/preserved museum site. The grounds hold crumbling foundations of a mausoleum, along with weathered headstones carved into likenesses of the deceased. Modern Burana is a collection of rural homesteads and loosely cultivated fields, housing fewer than 200 families.

A narrow staircase (not for the faint of heart) inside the tower leads to the 25-meter observation deck, from which you can still see remnants of Balasagyn’s enclosing wall.  On a clear day snow-capped peaks dominate the horizon to the north and south, with the northern range already in Kazakhstan.

Taking in unobstructed 360-degree views from the top, it’s almost possible to imagine the call to prayer from this 50-meter minaret summoning the denizens of the busy town below. These days the only sound is the wind, broken occasionally by the gasp of a frightened tourist clambering up the stairs.

Check out more pictures from Tokmok and Burana on Flickr: 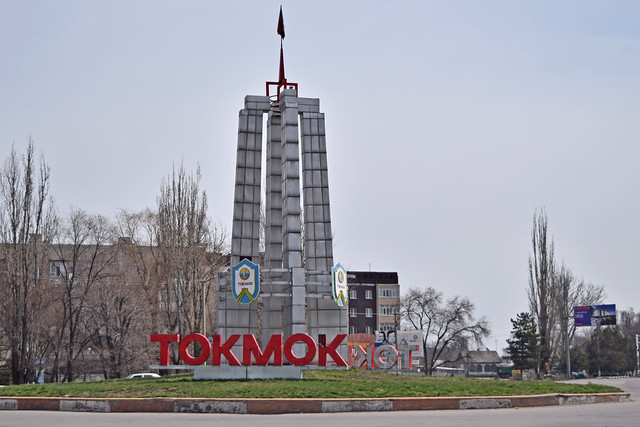