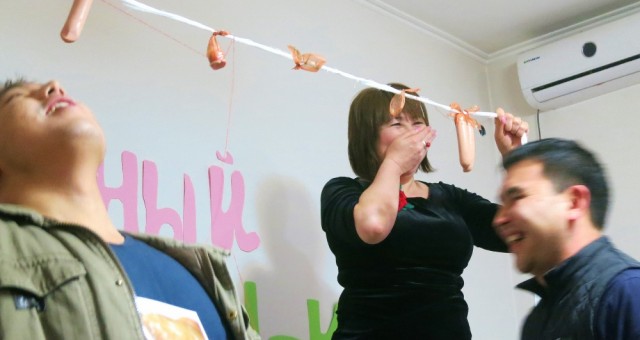 I’ve only been in Bishkek for three weeks, but I’m already feeding men hot dogs dangled from a suspended string. This Monday will be a working holiday for most Kyrgyz in honor of Defender of the Fatherland Day—and on Friday my office had a party.

Defender of the Fatherland Day is a truly Soviet creation. It was first observed to mark the date of the creation of the Red (Soviet) Army in 1918. After changing names a few times between Red Army Day, Day of the Red Army and the Navy, and Soviet Army and Navy Day, in 2002 His Majesty of Russia Vladimir Putin gave it its current name, Defender of the Fatherland Day, and made it an official state holiday in Russia. The name is still pretty long and many people simply call it “Men’s Day.” Regardless what you call it, today the big day is celebrated on February 23rd and it’s observed in many former republics of the Soviet Union, including Kyrgyzstan.

So, in honor of the big day, my office had a party.

The party revolved around men and food. It started off by the women pinning each male co-worker with a picture of some kind of food, ranging from a banana to plov. Then the women sang a very silly song to honor them. Then the men engaged in several interactive games:

The high-intensity game session was followed by a feast with delicious dishes prepared by the female staff members. So many manty. My favorite was the blini, aka pancakes. More specifically, the homemade jam and smetana—sour cream—used to top off the blinis. It’s going to be hard having cream that’s not made fresh from a neighbor’s cow after this experience. As for drinks, the women sipped on tea and apple juice and each man got his own can of Baltika #7.

Was there a final shebang? Of course. Because we appreciate our men so much, we got them all tickets to play paintball. All in all it was a successful Defender of the Fatherland Day celebration.