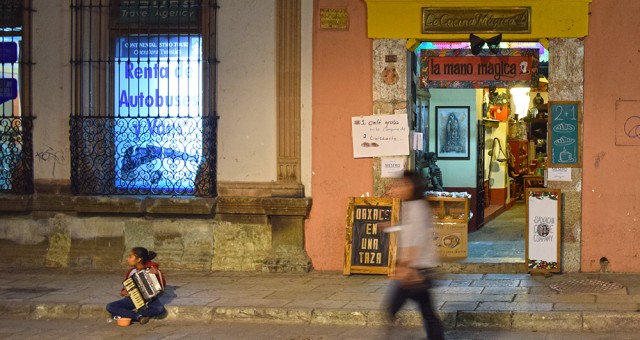 Snagged by the lure of a city apart, still dominated by tradition, where old women weave colorful tapestries on the street and vendors proffer a wide variety of insects for human consumption, where Mezcal flows like golden water and the spirit of the Zapotec still pervades modern life–we headed to Oaxaca City.

We found all these things and more, albeit scattered throughout a buzzing metropolis where modern ideals mix aggressively with traditional appearances to create a dynamic–and yes, unique–cityscape. Oaxaca is not the mythical city of the cloud jungle we were hoping to find, but its reality as a modern state capital makes up for any bubbles burst.

Our journey began, as often happens, in the bus station several hours before the city awoke. A reasonable and friendly five-minute taxi ride brought us and our backpacks to the Zocalo, the city’s market center. Still before 7AM, an army of street vendors was already busy preparing atole and tamales for breakfast and laying out the day’s wares.

We had a hostel reservation but forgot to bring a map, forcing us to wander in the general vicinity of the address before passing the right door. Outside the market square we funneled into narrow avenues speckled with potholes, punctuated by an ad-hoc traffic-light system that makes crossing the street a gamble.

Road weary after forty-five minutes of frustrated wandering, we finally saw the sign for Azul Cielo. We rang the doorbell and were ushered into a lobby that gave way to a serene courtyard full of tables, chairs, and foliage of all kinds. As we’ve seen before in Mexican hostels, we were not permitted to enter the courtyard or any common facilities until the check-in time of 1PM (unless we paid an additional fee), so we gathered our valuables, left our packs in the lobby, and emerged once more into the fray of civilization.

By now the city was entirely awake. Bumper-to-bumper traffic covered the roads, making walking difficult and breathing harsh. To make things more complicated, we had a job to do: buy bus tickets to Guadalajara, our next destination.

Oaxaca City has two main bus stations: one for the comfy, air-conditioned, entertainment-supplied 1st-class buses, and one for the stiff, sweaty 2nd-class buses. Hoping to save about $10 USD, we opted to try the latter. To get there, we threaded our way past the Zocalo and into seedier, smoggier streets lined with a different breed of vendor, hawking batteries and boxers instead of handbags and t-shirts. As we neared the west end of the city center we escaped the facade of tourism entirely, entering thick crowds of local Oaxacans living their day-to-day lives–buying bread, going to the bank, drinking coffee. Despite clouds of bus exhaust and the din of shouts and horns, there was something entirely refreshing about this neighborhood: it felt like a city to be lived in, not to be looked at.

Still, the bus station itself was jarring. Surrounded by p

uddled dirt streets and dusty parking lots, the 2nd-class bus station loomed like an unfinished Communist landmark dropped into a refugee camp. A cocktail of odors from all stages of metabolism accompanied us to the entrance. Inside the station was cool, dark and empty. The standard Mexican bus station half-circle surrounded the terminal, and a dozen or more bus companies vied for our business with bright signs and enthusiastic spokespeople. We got the information we needed and promptly left, deciding to try our luck at the 1st-class station–though we ultimately did return to the 2nd-class station to buy our tickets, and we have no complaints about the ride.
We spent the rest of our afternoon wandering lazily along the calle turistica, photographing churches and sampling a variety of street foods. We discovered that the city sprawls for miles along the valley, but that the central zone is very compact and walkable. A surprising number of pedestrian-only streets can be found between the Zocalo and Parque El Llano, diminishing the potency of exhaust fumes, and the same neighborhood hosts a variety of museums, galleries and landmarks.

Having successfully passed the check-in time, we headed back to enjoy our hostel’s exclusive courtyard, kitchen area and bathrooms. The atmosphere didn’t disappoint, but we didn’t linger–Oaxaca City had plenty more to show us and feed us before the sun went down.

the following days exploring the city on foot. We perused MACO, the Oaxaca Museum of Contemporary Art, which displayed an impressive selection of entries to a recent national competition. The top floor was dedicated to the Los-Angeles educated, Guadalajara-based Eduardo Sarabia, whose cross-medium exhibition commented openly on some of Latin America’s more delicate issues. We found a complementary, if unsettling, photography exhibit nearby at the Centro Fotográfico Álvarez Bravo, displaying stark images of heroin addiction in the border city of Juarez. We went in and out of half a dozen of Oaxaca’s ubiquitous churches, including the home base of the city’s patron saint, Soledad, whose coffers were overflowing for the holidays.
To get the lay of the land, we hiked up a seemingly endless staircase to reach the Guelaguetza Amphitheater. Perched at the base of a steep hill, this massive, imposing and modern structure is visible from almost any vantage point in the city below. It was built to hold 11,000 people, but is only used a handful of times each year–most notably for the region’s Guelaguetza (or “gift-giving”) festival. Completely empty save for two security guards, the theater and its grounds harbored an eerie, otherwo
rldly atmosphere. The terraces to the side of the main attraction, however, afforded stunning, panoramic views of the city’s central neighborhoods, as well as the steep hills flanking Oaxaca Valley.

For an even more expansive view and our archaeological fix for the trip, we signed up for a 20-minute bus ride to Monte Alban, a partially excavated city nested on a hill overlooking Oaxaca Valley. The seat of the Zapotecs for nearly 1000 years, Monte Alban is an impressive testament to pre-Columbian civilization in the Americas. While not as surreal as Machu Picchu or as vast as Teotihuacan (outside Mexico City), Monte Alban still offers an important glimpse into a society completely removed from our own. The trip is easy from the city center, and is worth the trouble just for the hill’s unobstructed panoramas of the modern metropolis below.

On our last day we were ejected from our hostel at 11AM and had over twelve hours before our bus departure, so once again we gathered our valuables and took to the streets, cafes and markets for a fully immersive day in the city. Sunset found us resting on a bench in Parque Labastida, snacking on elote while a troupe of elementary-school students gathered for a Christmas play. As gypsies, wise men, reindeer and more than a few Josephs and Marys skipped around the park, a neon-pink Hummer Limo pulled up on a side street. While the driver slowly negotiated a tight intersection, the young players ran to the scene brandishing their smartphone cameras, shouting about quinceañeras and fiestas in general. As the sky grew darker we saw several more limos follow the same path–apparently more than one local girl was celebrating her passage into womanhood in the same way. Eventually a signal from the nearby bell tower prompted the performance troupe to form a broad column and march into the church, with camcorder-laden parents in tow.

Satisfied with our dose of Oaxacan Christmas, we scrounged up change for one more elote and prepared to run the gauntlet, through the real city, back to the 2nd-class bus station.