Nooruz means a lot of things and can be spelled a lot of different ways, but it’s effectively the Persian New Year, observed on the vernal equinox (the first day of Spring, for anyone who doesn’t speak Medieval English). It’s celebrated enthusiastically in most areas with large Muslim populations, and these days it’s still a pretty big deal, even if the official calendar doesn’t reset.

On March 21st, 2015, we got our first taste of Nooruz in Kyrgyzstan. The taste could be described as nutty, slightly sweet–almost like a peanut butter smoothie–and it’s called Sumaluk. Beyond that, the day turned out to be a fun-filled adventure involving dead-goat polo, frenetic iced-tea giveaways, free concerts in massive public squares, and dozens of kids driving like crazy people in rented Power Wheels. To be fair, that last thing happens most days.

Our schedule was as follows:

If these words sound like gibberish, allow me to enlighten you. Kok-Boru is sometimes snarkily referred to as “Dead-Goat Polo,” for obvious reasons if you’ve ever seen a match. It’s essentially a nomadic game, most likely stemming from competition between hunters in pre-Soviet times in Central Asia. It’s still played by any male claiming to be a man throughout Kyrgyzstan, Uzbekistan, Tajikistan, Kazakhstan, and Afghanistan–though with minor/major variations in the name and rules. No matter what, the object of the game is simple: throw the 30-kilo goat carcass into the opponents’ mud pit as many times as possible. Be sure to check out our “Kok-Boru: A Brief Introduction” video at the top of the post if you haven’t already!

2PM – 4PM: Celebrating in the City

It might have been the weather–a near-perfect, sunny, 70-degree day–or the holiday, or a combination of both, but Bishkek really came a live on the 21st, and it’s the first time we’ve seen it happen since our arrival in February. Ala-Too Square in the city center is normally an imposingly vast and sparsely populated expanse of concrete, but on Nooruz it was crawling with revelers of all stripes.

Our first stop was the Sumaluk stand. Also going by a few other more-or-less phonetic spellings, this remarkably palatable concoction is only served for Nooruz. It was tasty, and reminded me a little bit of peanut butter. Apparently, it’s a mixture of specially grown wheat, as well as other grains, nuts, and sugar. It has to be cooked for over 20 hours, which undoubtedly contributes to the fact that it’s only served once per year.

Satisfied and full, we weaved our way through the crowd to check out the concert. It was surprising to see, in the middle of the distant stage, one small person surrounded by about 100 meters of buffer zone. Stage diving was definitely not a possibility here. Various concerts were held and enjoyed in various locations in the city center–most here, in Ala-Too Square, but also in the Philharmonic down the road.

7PM – Whenever: The Party Is Still Going

We went home to eat a healthy, American-inspired dinner of vegetables and gluten-free grains, and hit the city again just around sunset. The park along Erkendik boulevard was empty, but Ala-Too Square was still teeming. With the concerts and other entertainment concluded for the night, officials had opened Chuy Prospect to the general public. Given the opportunity to roam free between the two sides of Ala-Too Square felt like a surprisingly significant improvement to me, and the kids were enjoying it too. Generally confined to a limited space near the statue of Manas, their rented Power Wheels were careening haphazardly in every imaginable direction, slaloming pedestrians in the main street and honking their squeak-horns wildly with no purpose whatsoever.

Ala-Too Square at Night on Nooruz 2015

The city itself looked fantastic, decked out in its Nooruz regalia of neon lights and glowing banners. We spent a long time wandering around and photographing the event, until the light diminished beyond our useable ISO and we found ourselves, inexplicably, in the Bishkek Park Mall.

I thought “Defender of the Fatherland Day” was great, but Nooruz beats it hands down–Нооруз майрамы, everyone, and happy new year!

As usual, check our Flickr album for more shots of Nooruz 2015: 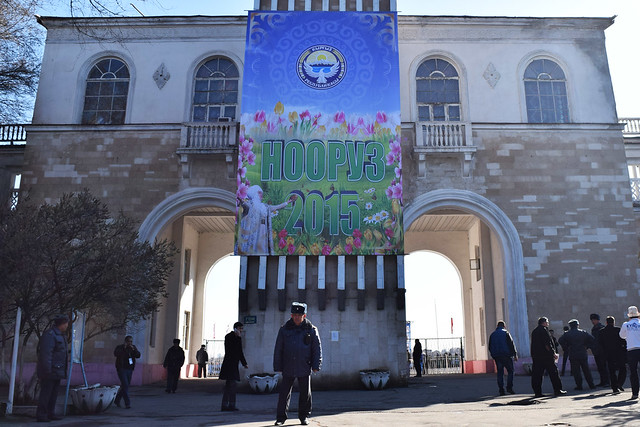