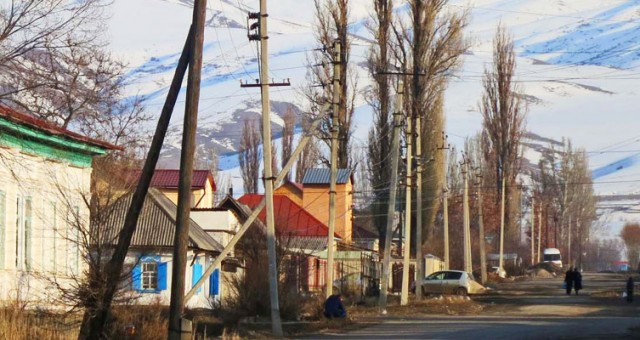 We took advantage of Women’s Day weekend to make the 6-hour trip from Bishkek to Karakol, hoping that we’d get a chance to hit the slopes of Karakol Ski Base before the Spring thaw. What we found in the budding traveler’s paradise was a mix of rugged provinciality, first-class hospitality, and in early March, lots of mud.

As we’ve come to regard as the norm in Kyrgyzstan, we traveled to Karkol via marshrutka. The journey–approximately 6 hours from Bishkek’s eastern bus terminal to Karakol’s central station–was surprisingly easy and unexpectedly scenic. The road stayed relatively flat throughout the journey, but jagged mountains appeared about an hour outside of Bishkek and only seemed to get taller and closer as we traveled east. Lake Issyk Kul, one of the highest navigable lakes in the world, is surrounded by snow-capped peaks.

Very few Karakol guesthouses have information listed on the internet, let alone profiles in booking web sites, so we decided to find our accommodation upon arrival. We had a place in mind, but our taxi driver didn’t know where it was. He suggested another place and we agreed, so he drove us there.

Kyrgyz Tours Guest House is run by a family, which seems to be a common arrangement in Karakol. They had at least two suites for rent in private spaces attached to their own home. In the summer, they erect two yurts in their yard to offer an authentic–if a bit barer bones–accommodation alternative. We bargained them down to 1000 som for our suite, which we later regretted after discovering how well they treated us. Every day they left us fresh bread, homemade jam, and tea in our living room, and every morning they served us a veritable feast, of which we ate half at breakfast and saved the rest for lunch. They also cheerfully managed all of our logistics, including calling taxis, arranging ski rentals, and orienting us in the town and the region. Staying there was like staying with old friends–except better, because they left us alone when we didn’t need anything.

Our first experience with Karakol mud came soon after checking in. Just steps from our guesthouse, we took a shortcut to go diagonally through the yard of the kind-of-famous Holy Trinity Russian Orthodox Church when we found ourselves ankle deep in dark, high-viscocity muck. Usually I feel ostentatious wearing my American hiking boots in town, but here they were a necessary accessory. We washed our shoes in a melting snowdrift and paid a visit to the church, which was surprisingly full given that it was a Saturday afternoon in a predominately Muslim country. Interestingly, because of the Soviet Union’s ban on religion, this building was used for a variety of purposes including a school, a theater, and a coal store, before being restored to religious service in the ’90s. It’s now back in full swing, and is Karakol’s premiere purveyor of Jesus-related souvenirs.

We wandered a bit farther and found what we believe to be the center of Karakol, comprised of two streets and their meeting point. One street is lined with tour agencies–most closed for this season–and the other houses the central bazaar and a few restaurants. After everything I’d heard about Karakol, including the European-style ski resort and the wealth of tour agencies, I admit that I expected a more fully fledged infrastructure system. The mud seemed to follow us everywhere. Many of the streets, even just steps from the town center, are dirt, as are nearly all of the sidewalks. Manicured parks are present, but public space also includes vast un-groomed courtyards where shepherds graze their flocks on muddy tufts of grass, and the majority ground cover is that ubiquitous brown muck.

If anything, this rugged cityscape lends charm and a bit of real-world grit to a potentially over-developed tourist destination. Switzerland and Austria will attract their own brand of mountain-going travelers, and Karakol is here to cater to another type. But I wonder how long this will last, with the current buzz around tourism development and the potential for investment from nearby oil-rich Kazakhstan as well as from Russia and even the comparatively cosmopolitan capital of Bishkek.

Our driver the following day, who took us in his 4WD mini van to the base of the ski resort, was a local, born and raised, who lived in Karakol with his family and worked as a tour operator. “I don’t want to be rich,” he told us. “With wealth comes too much responsibility. I want to have enough for my family to eat well and live comfortably, but the rest–I don’t need it.” We could see this attitude come into play throughout our experiences in Karakol. Every facet of the hospitality industry seemed geared toward cooperation, toward ensuring that the needs of each visitor were met in the fairest way possible. As the end customers, we certainly appreciated the approach as well. We truly felt like guests in the town, rather than statistically modeled commodities or pieces of meat being haggled over at the market–which, unfortunately, is often the vibe we get from destinations with high tourist turnovers.

Skiers and Snowboarders at Karakol Ski Base

Mountain view from Karakol Ski Base

The primary purpose for our visit was to latch on rented skis, ride up to the 3,000-meter peak of the Karakol Ski Base, and slide down to the bottom quickly with minimal damages to our bodies and equipment. We met that goal time and again–in fact, nearly continuously throughout the ski resort’s 8-hour daily operating time. Karakol Ski Base is the highest in Central Asia, and it operates a decent number of bare-bones but fully functional lifts that speedily chug to the 3040-meter peak. There’s a bunny hill for beginners, plenty of variety for intermediate skiers, and a few scary-steep moguls and wooded trails for experts. We especially loved the mid-slope cafeteria that provided everything from sausage to cognac, with scenic views included.

When we got back to the ski rental store, we were surprised to find a group of American kids, chaperoned by their dad and a local Peace Corps volunteer. They’d been living about 20 km outside of Karakol since last summer, when his wife started a Fulbright fellowship in the area. “The kids love it here,” he said. “We were homeschooling two of them anyway, and we’re a pretty tight-knit group, so it wasn’t hard to uproot.” I looked around at the four kids, and sure enough, didn’t see a sullen face among them. They looked like they’d just gotten done with a fun day on the slopes in any American ski town–chatting excitedly, hitting their dad up for Snickers bars. The owner of the ski shop had moved to Karakol from Bishkek about the same time the American family arrived, and they’d struck up a friendship quickly. He and his kids all speak English, which I’ve come to see as a rarity in Russian-influenced Kyrgyzstan, and all parties welcome the familiar interaction.

The shop owner’s youngest son is a lucid and outgoing 8-year-old. When asked if he liked Karakol, he quickly replied: “it’s dirty here.” His father laughed a hearty laugh and answered that it’s dirty in Bishkek too. I could see the kid contemplating, not quite agreeing. Bishkek’s dirt comes from people, machines, factories. Karakol’s dirt comes from the ground, from the snow, from the local livestock. This is real dirt–which, if you’ve got the right shoes, is a good thing. 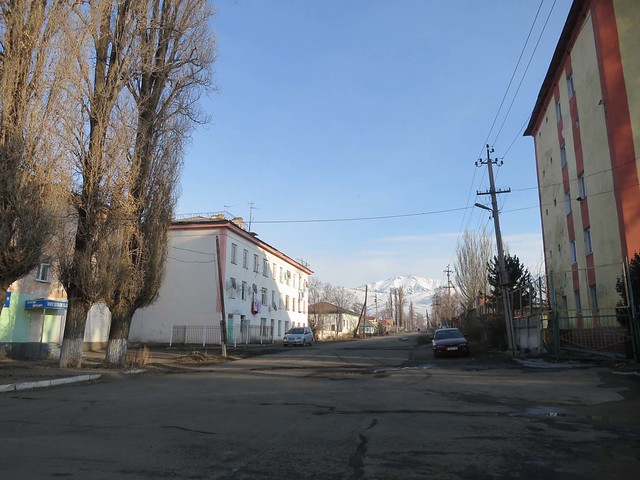