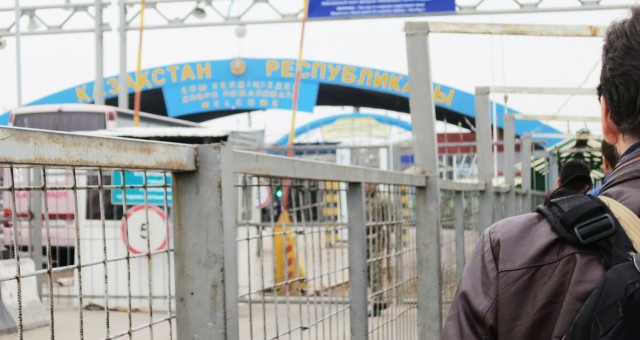 Short version: For citizens who get a 60-day tourist stamp, the easiest way of “extending” your stay in Kyrgyzstan is simply crossing the border into Kazakhstan, then getting right back in line. You’ll automatically get a new tourist stamp valid for 60 days.

Long version (only if you really want all the details!): A couple months ago we reported that moving to Kyrgyzstan is a breeze, with minimal bureaucratic obstacles, plenty of available housing and a user-friendly public transportation system that really works.

In this installment of the “Moving to Kyrgyzstan is Easy” series, we tackle the all-important process of visa renewal. In true Kyrgyz fashion, the procedure is unorthodox and not at all what we expected: no embassy lines, notarized letters of intention or paystubs necessary. All you need to renew your kyrgyz visa is a passport and a marshrutka ticket.

Before we get started, here are the facts:

Citizens of the following countries can get a 60-day tourist stamp for free on arrival at the Kyrgyz border (airport or overland):

You also have the option of purchasing a business visa or a student visa at the airport for $70 USD. You don’t need to show anything to prove your status when you get the visa, but in order to extend it (which is the only advantage of these visa types) you’ll need to go through some bureaucratic procedures.

Here’s how our visa experiment started: Stephanie planned to be a full-time student for at least the first few months. The 60-day tourist stamp cannot be renewed or extended as a business or student visa, and her language school–The London School in Bishkek–recommended to get the $70 student visa at the airport and extend it. She went that route, expecting to be on easy street for 4-5 months. She also wanted to do things “legally” and “the right way” because she would be in the country for one year. I went in a different line and just got a stamp, which gave me 60 days of tourist freedom. Stephanie started having problems right off. The London School in Bishkek would only file the paperwork for her visa extension for as long as she was pre-paid. For various reasons she only wanted to pay for a month at a time, so that’s all they gave her–a one-month extension–for a $20 processing fee.

Another month later, our visas expired at the same time, but hers cost $90 and mine was free.

Soon, Stephanie started an internship with Public Foundation Camp Alatoo. The plan, then, was for her to get a business visa that they could then extend for a certain amount of time, allowing her to stay in the country hassle-free for (hopefully) the duration of her year-long fellowship. The only problem was that the organization didn’t know the procedure for extending business visas, so we started to ask around elsewhere. We went to three different immigration offices in Bishkek, all three of which directed us to one another in a sort of Kafkaesque round robin. All they could tell us was that if you want a business visa you have to buy it at the airport for $70. Everything after that is a different office’s responsibility.

If we didn’t speak Russian, we wouldn’t have gotten even that much out of these offices. There was no English-language support whatsoever.

We finally got ahold of a few sources to corroborate the idea that business visas have to be extended through agencies. So once you purchase a business visa for $70, it has to get extended via an agency–for a fee. According to our conversations with different agencies, they charge about $500 for every six months that the visa would be extended, so price-wise it’s actually more than buying a new $70 visa every single month.

Meanwhile, my 60-day tourist visa was still going strong, and well worth the nothing that I paid for it. But what are the disadvantages to living in Kyrgyzstan on a simple tourist visa? NONE, that I can see.

Kyrgyzstan doesn’t have that “60 days out of 180 days” rule that you often see elsewhere, so all I have to do to renew my visa is cross the border, get an exit stamp, and cross back. Bishkek is about an hour from the Kazakh border, so I can wake up, have breakfast, and get the job done before lunchtime. After hours of time waiting in offices, researching and getting advice from every corner of the Internet, Stephanie (finally) decided to go with a tourist visa this time around.

How We Renewed our Kyrgyz Visas (aka tourist stamp)

We decided to make a weekend of it and visit Almaty for the first time. Following the Internet’s advice, we headed to Bishkek’s western bus station on Jibek Jolu Prospect, just north of Osh Bazaar. We got in a marshrutka right away for 400 som per person. Unfortunately the car didn’t fill up for a nearly an hour, during which time we had to sit inside and eat raisins. Turns out this can be fairly common. Once the marshrutka took off, it only took about 45 minutes to get to the Kazakh border.

At the border we grabbed our backpacks out of the trunk and followed our fellow passengers into a small building with two lines. When it was our turn, we were told by the official that there was a separate line for non-Kyrgyz/Kazakh nationals that we had to wait in. No problem. We waited, they took our passports, and they gave us our passports back five minutes later with shiny overland exit stamps.

Border between Kazakhstan and Kyrgyzstan

Walking the Cage on the Kazakh Border

After that, we crossed the street and headed into a sort of cage that led into another building. At the end of the cage, a border guard was holding everyone back, and every once in a while letting ten or so people through. We eventually got to the front and walked into the building, where four or five officials were set up in their tiny offices to give stamps, take pictures and ask questions.

Here’s where we made our one mistake: it is absolutely necessary to fill out the little slips of paper that the first Kazakh border guard is holding. He’s not just there to keep the flow regulated–he’s also handing out the “immigration forms,” which amount to writing your name, passport number, and destination address in Kazakhstan (real or not). Tip: make sure to grab an immigration form from the Kazakh border guard. Since we neglected to grab these, we were sent to the back of the line. It wouldn’t have been a big deal, but a busload of people had just arrived and we had to muscle our way ahead of the crowd. Note, however, that the experience was in no way unpleasant, even when the room was crowded. I read scary stories on the Internet that made me expect to have to wave my fists and yell threats just to keep people from cutting. It’s more like old ladies tapping you on the shoulder and asking if they can go ahead because they are old. It’s just that there are a lot of old ladies, so you can’t say “yes” to all of them.

When it was our turn the official asked if we spoke Russian. We said we did, so he asked a bunch of benign questions. It might have been easier just to say “no.” He then took our pictures, gave us back our immigration forms and passports, and sent us on our way. Someone said “America, Michael Jackson,” on the way out, but I’m not sure if it was directed at us. We found our marshrutka, packed in our gear, and enjoyed the remaining 2.5 hour drive to Almaty. There is a toilet stop, by the way.

We had a good time for a couple days. We hung out with Dennis Keen from Walking Almaty and produced a video profile about his project–you check it out here.

Coming back to Kyrgyzstan

Coming back to Kyrgyzstan is also easy. Marshrutkas depart from Almaty’s long-distance bus station Sairan. Pick up a cheese samsa for the road while you’re at the station, because they’re tough to find in Kyrgyzstan. Upon entering Kyrgyzstan you’ll get a new tourist stamp that is valid for 60 days. Also, if you previously had a different type of visa (eg. business or student) you’ll be given a tourist stamp.

If you happen to go by plane–we’ve since done that, too–it’s about a 45-minute flight between Almaty and Bishkek. It’s one of those “blink and you’ll miss it” flights where they tell you you’re at cruising altitude and can use your laptops, then in the same breath tell you the descent has begun and you need to turn off your laptops. They did, however, give everyone full cans of soda. Bus #79 is our preferred bus between Almaty airport and the city center; #92, #106 and #86 also go to the center.

Over our year in Kyrgyzstan we ended up crossing the border loads of times, so let us know if you’d like us to write about something more specific. And as the sign at the Kazakh passport and customs control says: Good Luck!