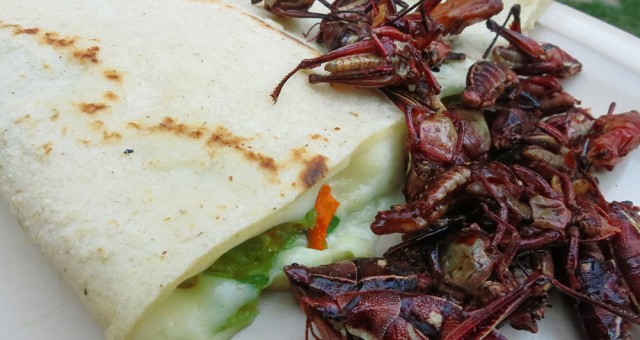 I was once a careful tourist, eating only what seemed safe and normal when I traveled abroad, but I learned a valuable lesson when a boring roast-beef sandwich in Paris left me bedridden for a week–if even “safe” food can be dangerous, why not just eat everything? From then on I’ve followed my instincts and indulged in anything that looks or smells enticing, interesting or downright weird. On a side note, I think my immunizations are up to date.

Oaxaca City is a paradise for the gastronomical adventurer, especially during the festive holiday season from mid-December to early January. Dozens of market stalls concentrated around busy squares and churches serve regional dishes for breakfast, lunch, dinner and everything in between. Since stall setups are nearly identical, it’s hard to know which one to choose–we always look for the busiest one, in hopes that they’re busy for a good reason.

The first thing we ordered when we arrived was atole. This hot, sweet breakfast drink is made from corn and masa (like corn flour). The standard version in Oaxaca is flavored with chocolate and called champurrado, now one of my favorite words and possibly a future band name. Atole goes best with fresh tamales, preferably filled with mole negro (more on that later) or dried fruit.

For lunch we had a tlayuda, something we’d seen advertised at nearly every restaurant since arriving in the state of Oaxaca. Tlayudas, when ordered properly, are like oversized tostadas for gluttons. Beans, cheese, meat (anything from chorizo to chicken), avocado, tomato and cabbage are all smothered in pork lard and piled on a freshly cooked corn tostada at least 1 foot in diameter. We left the market stall satisfied, if a bit drowsy.

Other fare on offer includes tacos dorados—crispy tortilla tubes of fried meat topped with mole or beans and cheese. You’ll also find quesadillas that do bear some resemblance to the kids’ menu staple, but are bolstered by mushrooms or colorful  flores de calabaza (squash blossoms).

One hot afternoon, we treated ourselves to lunch at a restaurant recommended by our favorite hostel employee. Just two blocks from our home base at Azul Cielo, Sabor Antiguo was exactly what we needed: a clean place, reasonably priced, with huge, delicious portions of traditional Oaxacan dishes. I took this opportunity to indulge in a quality mole. Pronounced “mo-lay,” this chocolaty, nutty, spicy brown sauce is an experience unto itself–its charms are difficult to convey with mere words. While mole mix is available at most supermarkets in the USA, it usually lacks a few key ingredients–namely chocolate. Oaxaca is world renowned for its chocolate, and its moles are saturated with the bitter paste of hundreds of choice cacao beans. Poured over steamed chicken and served with rice, soup, and a pitcher of horchata, the mole at Sabor Antiguo was more than satisfactory.

There are two dishes that set Oaxaca apart from Mexico and even farther from the rest of the world, and no trip to the city is complete without sampling both. One is mole, the aforementioned sauce that tastes like nothing else in existence; the other is bugs. Anywhere you find tacos, quesadillas or Pepsi, you’ll also find vast cauldrons of saltamontes (grasshoppers),  chapulines (crickets), and gusanos (caterpillars), cooked to crunchy perfection and seasoned with lime, garlic and sometimes chili. The spicy snack is actually a healthy substitute for more common finger foods, providing high doses of protein with little excess. I enjoyed the chapulines at first, but after a few handfuls I admit that I felt a bit queasy.

I don’t chalk up my stomach’s unrest to the food itself, but rather to an unfortunate side effect of Americanness. In much of the United States we habitually repress the thought that meat comes from animals. While we happily devour eggs and chicken breasts by the ton, delicacies like balut (fertilized duck eggs) or chicken feet are disgusting to the average American. With grasshoppers there’s no hiding the fact that you’re eating an ENTIRE organism: legs, tail, gut, antennae. While I’m convinced intellectually that it’s sustainable, efficient, and even healthy to eat bugs, I still can’t completely suppress the feeling that I’m poisoning myself with grasshopper brains.

Stephanie handled the grasshoppers more deftly, having been prepped by a Polish/Mexican diet of blood sausage and tripe soup, but after she had her fill we donated the our bag to the hostel. In nearly equal parts, our fellow guests were either fascinated or repulsed by the crunchy little snacks–but in the end, the vast majority of chapulines ended up in the belly of a Mexican tennis player who was researching business opportunities in the bug-protein industry. 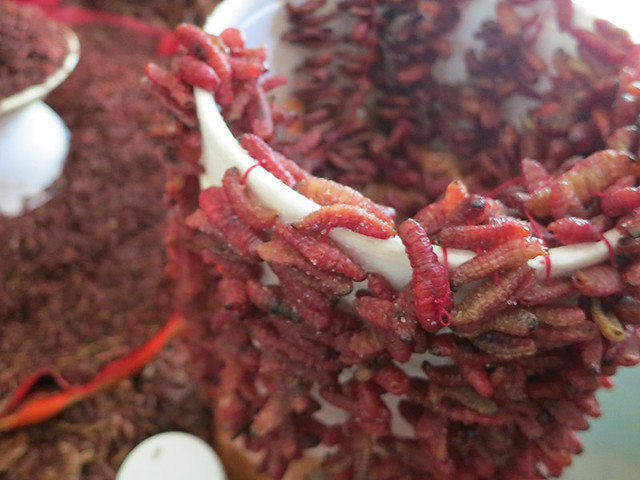