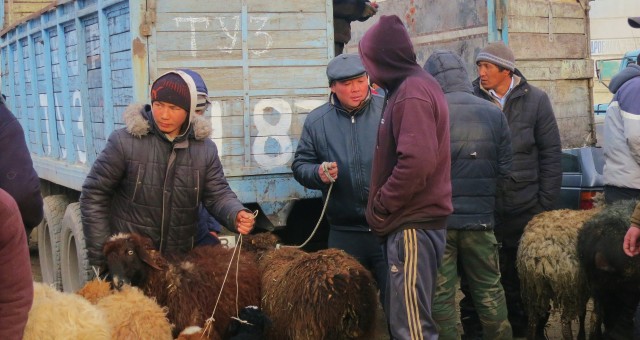 Talk to a few locals in Karakol and you’re bound to get asked: are you here to visit the animal market on Sunday? This is one of Kyrgyzstan’s largest and most typical livestock markets. It runs once a week, only on Sundays. If you’re in Karakol it is not to be missed!

We got a ride from the guesthouse and the car pulled up as far as it could go before we found ourselves in a traffic jam sandwiched between aging Ladas and confused horses. We had no idea what to expect, but it was a one-way parade and we couldn’t stop even if we wanted to because there were so many people tugging cows, sheep, goats, and other animals by ropes attached to their wrists. We had to just keep moving and play cat’s cradle with the livestock.

Eventually the parade of people came to a halt. Among the sea of people and animals, a large van was trying to back up and make it to the main road. We had no choice but to stand in place for a very long time, so we took the opportunity to look around us and figure out where we actually were. It didn’t take long to realize we were in a huge parking lot—more like a pen—full of people and animals. Left and right were heard people repeatedly asking “Канчадан?” (kanchádan), which means “How much does is cost?” in Kyrgyz.

Oh man, this really was an unorganized blob of a lot of people and a lot of animals. People come here from all parts of Issyk-Kul oblast–sometimes from all across the country–to trade/buy livestock and to purchase meat. If you’ve got the itch to purchase a cow, this place is your best bet. Just make sure you come very early because the party starts closing down around 11:00 AM!

Despite the sometimes aggressive way of treating the animals, from my human perspective the animal market is a very festive and curious place. To top if off, the setting among derelict mills, warehouses, and snow-capped mountains in the backdrop made it feel quite magical. We’ll definitely be back again–and maybe next time I’ll get that pony I’ve always wanted. 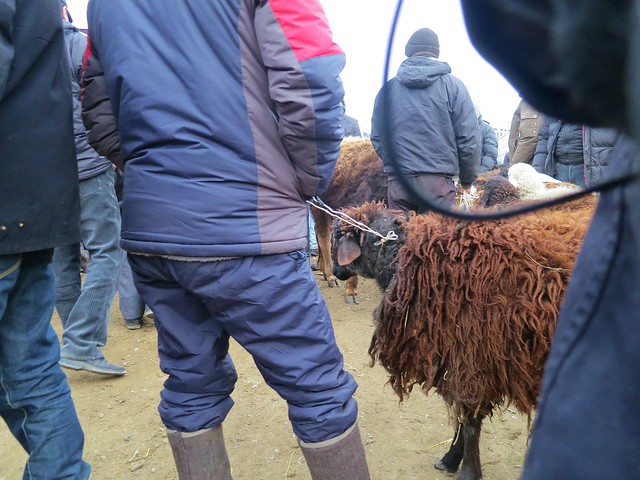