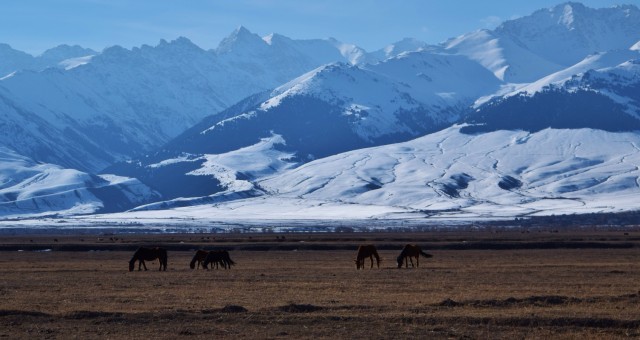 It looks like we’ll be spending a good chunk of time in Naryn Oblast (province) over the next several months!

What originally brought Joe and me to Kyrgyzstan is my involvement in a pilot project aimed at introducing low-cost environmental field courses in mountain schools in Kyrgyzstan. Click here for more details about the project. In April I’ll be heading to Naryn Oblast with the Krygyz Public Foundation Camp Alatoo to visit 30 village schools. Hopefully Joe can come with to document the experience both for CAMP Alatoo and for Pedaling Pictures. If he can’t go, he’s going to be jealous.

Naryn Oblast is located just south of where we live, which is in Chuy Oblast. Naryn is Kyrgyzstan’s largest (and coldest) oblast and is dominated by tall mountains, alpine pastures, and in the summer months large herds of sheep and horses. Animal herding is the mainstay of the economy, with wool and meat being the main products.

During the Soviet era, Naryn Oblast was deemed uneconomical, and for this reason very little development has taken place and it remains economically the poorest part of the country. The population of the oblast is very sparse compared to its geographical location. On the other hand, the population of Naryn Oblast is 99% Kyrgyz and it’s considered the most quintessentially Kyrgyz region. (Fyi: northern Krygyzstan has a high concentration of Russians and southern Kyrgyzstan has a high–even predominant in some areas–concentration of Uzbeks, in addition to several other ethnic minorities.)

We haven’t even left Bishkek yet but we’re excited for the mountains, animal products and yurts. Personally, I’m super excited that my real work in Kyrgyzstan is about to start (and that my 50 hrs/wk studying Kyrgyz will finally pay off) and for the adventures and misadventures that await.