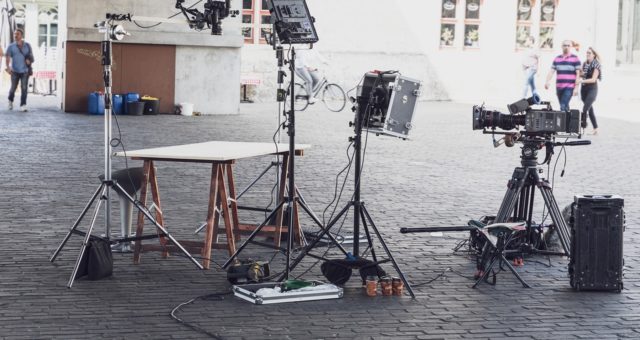 So you’ve decided that you’re ready to produce a video. Congratulations! Video can be a huge step forward in promoting your business, your non-profit organization, your latest project or your own winning personality.

The next step is finding the right team to help you mold your vision and produce a video that really works–whether your goal is to grow your audience, sell your products or wish Betty White a happy birthday.

You could go the DIY route, but odds are you’ll get the best results with a video production company. Not all video production companies are created equal, so in order to maximize return on investment, you’ll want to find a company that meshes with your particular project. If you end up working with the wrong company, you can either pay too much (sometimes way too much) or end up with a video that doesn’t meet your needs.

This post lays out five common types of production companies, how to spot them, and how to know if they’re right for you.

These companies have already made a name for themselves in the Industry (that’s a capital “I”). Some have theme parks bearing their namesake; others are riddled with tabloid scandal. They have access to the greatest minds in video, and budgets limited only by box office projections.

Pros: They have thousands of top-tier video professionals on staff, on call or waiting in the wings. They’ll also finance your movie for you, instead of the other way around.

Cons: They’ll only green-light the project if they think it will make money.

How to Spot Them: You already know their names. The only obstacle is finding the CEO’s secretary’s assistant’s email address.

When you need them: Unless you have an idea for the next runaway hit–or you have a great script, it’s copyrighted and you have a good lawyer–you’ll want to avoid these studios.

Commercial Grade Cream of the Crop

More in the realm of the hirable, a number of production companies specialize in commercials for TV and online delivery, as well as other high-budget projects like A-list music videos. There’s a surprising amount of crossover between this kind of production company and the above Hollywood Big Shots, as a number of directors and producers in the Entertainment Industry also moonlight as commercial and music video producers.

Pros: These production companies can offer maximum quality in terms of production value, and some can bring big-name recognition to the credits by hiring a prominent director, cinematographer or choreographer.

Cons: Even modest projects will have huge budgets. The overhead required to operate production companies at this level is staggering, with full-time office staff, classy addresses and in-house studios being the norm.

How to Spot Them: Portfolios will highlight prominent clients–think soda, cars, body wash or anything else you might have seen at Half Time.

When You Need Them: If price is no object, Commercial Grade companies can objectively deliver the best quality possible. But unless your company is on the Dow or your non-profit is run by someone named Gates, you would probably fare better with slightly less flash.

In terms of clothing, “boutique” usually means small, unique and slightly more expensive than your average store. For video production, it’s essentially the same. Creative Boutique agencies often specialize in one area of production, like web design, graphic design or video, but some combine all three and more. There’s really no limit to what a small group of creatives can accomplish when they corral their desks under one roof.

Cons: Just because it’s local doesn’t mean it’s cheap. Brick-and-mortar agencies still have a lot of overhead to cover, and some have full-time, non-creative staff. Just like Commercial Grade companies, Creative Boutiques often have to charge high prices for even simple projects.

How to Spot Them: They have clean, modern websites and a number of experienced creatives listed in the “About Us” section with very specialized roles. Portfolios usually show a wide variety of projects, from non-profit gala videos to TV spots.

When You Need Them: If you have a healthy budget and a relatively complex video in mind, a Creative Boutique might be the right choice. They can help you develop your idea and see it through to completion, but keep in mind that they’ll be paying multiple professional salaries along the way.

Your friendly neighborhood video production company is just an email away! Mom and Pop Shops are often run by one or two multi-talented creatives who can handle a wide variety of jobs, or can activate networks of freelance friends to help with bigger gigs. They’re the video production version of your favorite corner store, selling everything from candy bars to spare tires. If it’s not in stock, they know where to order it.

Cons: Complex productions or demands for top-notch production value can be complicated, as Mom and Pop Shops usually don’t have immediate access to large crews, and they don’t have the pull that some agencies can offer in securing exclusive locations.

How to Spot Them: These production companies often forego brick-and-mortar offices, instead working from home or from coworking spaces. Portfolios will either show a wide variety or little variety at all, depending on the level of specialization. Compared to Creative Boutiques, Mom and Pop Shops often take on fewer clients in the same time span.

When You Need Them: If you’re looking to maximize the quality-to-price ratio and have a good idea of what kind of video you want, these small agencies are often a great choice. They’ll be able to provide support throughout the production process, but are less likely to charge exorbitant fees.

Like the lone wolves of the video production wilderness, freelancers prowl the tundras in search of jobs to sustain them. Freelancers are often hired by larger agencies to fill out production crews, but they also take on jobs where they work directly with clients.

Pros: Freelancers offer the greatest amount of flexibility in terms of pricing, revisions, project support and production value. By nature of the work, freelancers often have expertise in areas besides video production, so they can help craft email campaigns or design web graphics as well.

Cons: Like Mom and Pop Shops, freelancers can be limited in scope. While well networked videographers can assemble crews and work in a similar capacity to Agency directors, they’re more suited to more modest video productions.

How to Spot Them: If you’re advertising a gig on Craigslist, Freelancer.com, Facebook or Mandy.com, many of your respondents will be freelancers. Their portfolios will generally be smaller than other production company types, though they may display a high degree of variety.

When You Need Them: If you have a clear idea of your goals for your video, hiring a freelance videographer can be a low-risk decision. Just be ready to offer feedback and participate in the development of your video. To a freelancer, the client is often treated as part of the creative team.

Since you’re here on the Pedaling Pictures blog, you might be wondering, “what kind of video production company is Pedaling Pictures?” If we had to choose we’d probably say we fall into the Mom and Pop Shop category. We don’t have a brick-and-mortar location and we keep overhead to a minimum. One of our biggest selling points is that we can offer the same quality for much lower prices than full-scale agencies. We simply don’t have anyone (or any landlords) depending on us to bring in huge bounties on every project. However, like all good Mom and Pop Shops, we’re well networked. If a client requires a production that’s outside our scope, we can easily activate our networks, crew up, and get the job done agency-style.

Still have questions about choosing the right production company? Contact us here. We’re happy to help!

This article has 1 comments