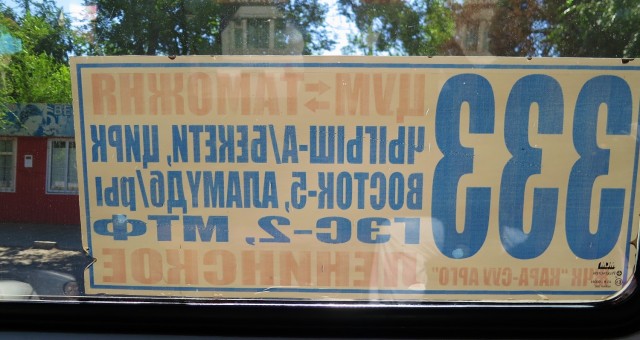 You’re in Almaty and you’re heading to Bishkek! Cool! We spent a year in Bishkek and travelled frequently between the two capitals. We thought this post might be useful for anyone planning to make this trip for the first time. We prefer to go by marshrutka (shared minibus) and recommend this way because it’s easy, inexpensive (about 1,300 KTZ) and it’s pretty quick (about 5 hours).

In Almaty, how do I reach the long-distance bus station from the city center? 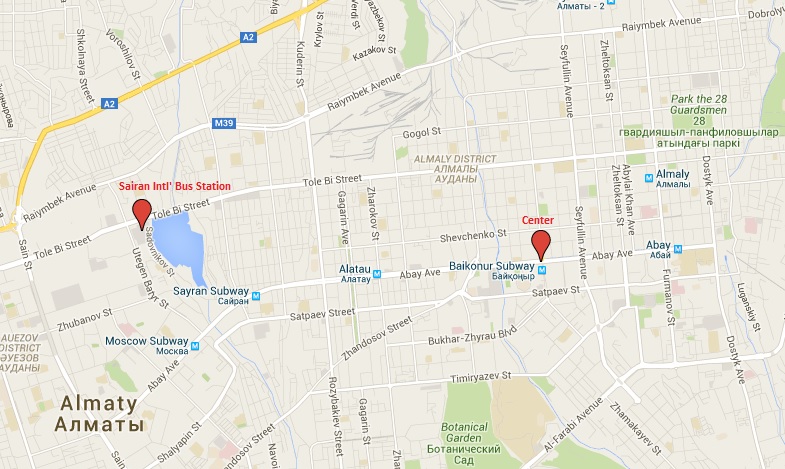 Marshrutkas to Bishkek depart from Almaty’s long-distance Sairan bus station (международный автовокзал Сайран). The bus station is located some 7 km west of the center so you’ll need to take public transportation to get there. From the center you can take bus number 45 from along Dostyk Ave or the metro and get off at Moscow subway station (“Москва“) and walk about 20 minutes (but it’s a nice and easy walk, and you can get your last fix of cheese samsa on the way because they’ll be tough to find in Bishkek). Public transportation costs 80 KTZ, so save some change for the bus or metro.

I’m at the bus station! What now? I don’t see any marshrutkas anywhere… 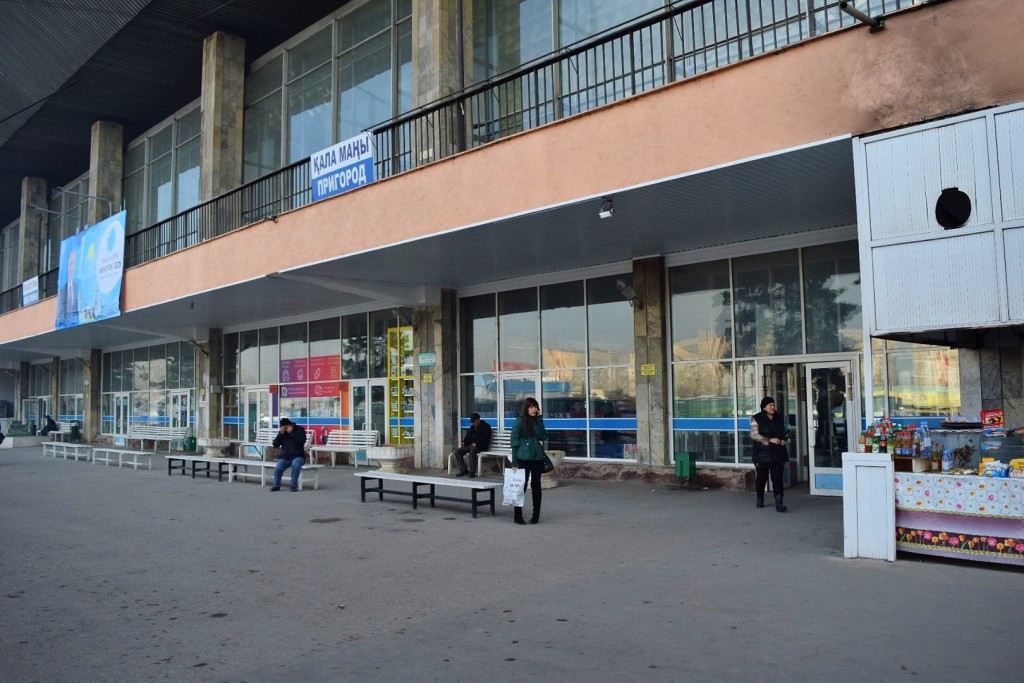 Great job! You made it to the bus station. Marshrutkas depart from behind the bus station, so head inside and walk straight through to the back, towards an exit that resembles the picture below. It might look like you need to show a ticket to get through, but you don’t–you’ll purchase your ticket directly from the driver. 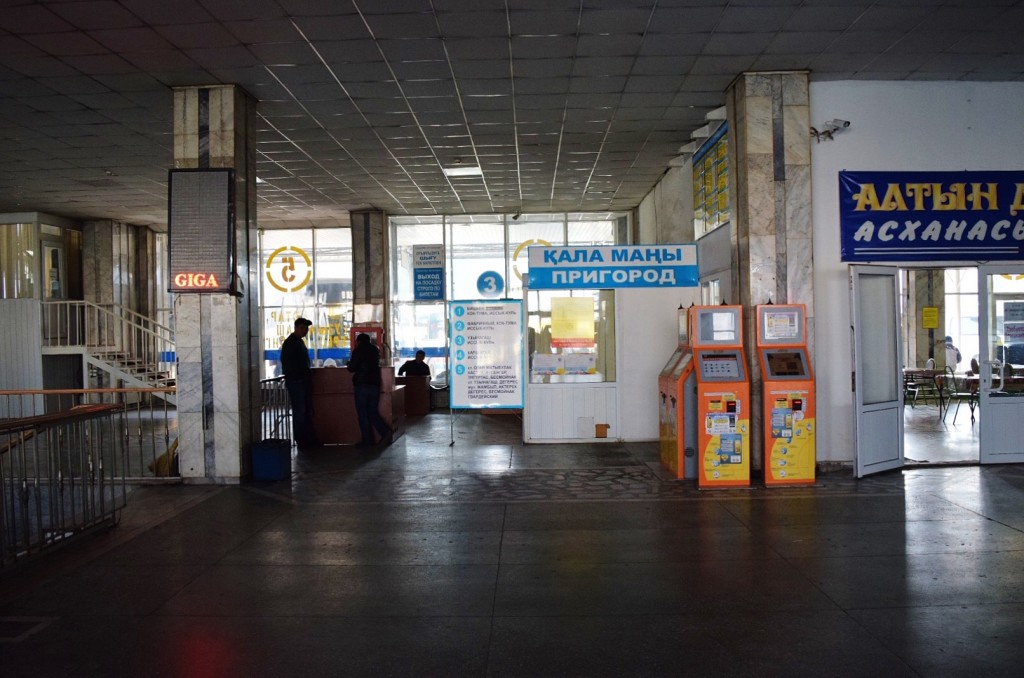 Marshrutkas to Bishkek leave from the first platform. When you exit the bus station, turn right and walk all the way to the end–you can’t miss it. 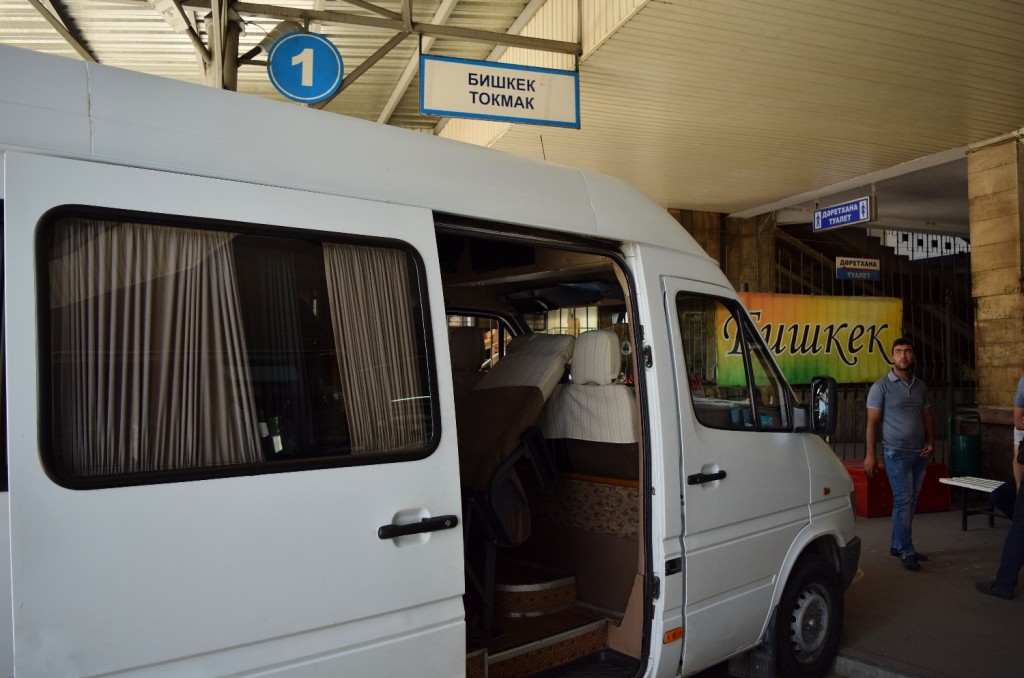 Marshrutkas to Bishkek depart from platform 1 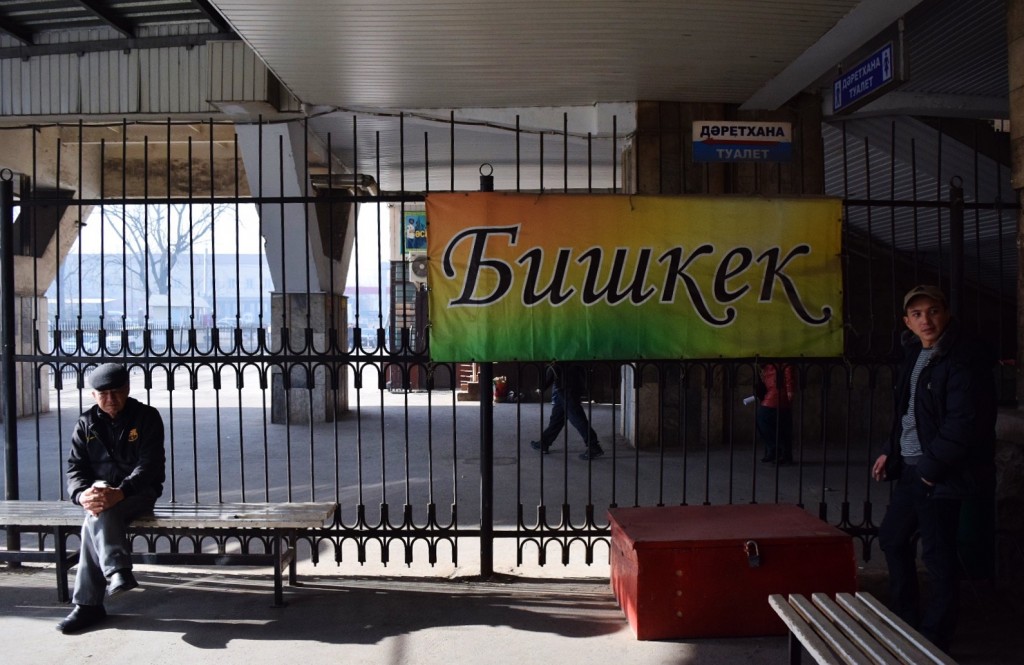 As of January 2016, the ticket price was 1,300 KTZ or 400 KGS (you can pay in either tenge or som). Marshrutkas leave constantly from early morning until evening. They go when they fill up, so you might get lucky and leave in 10 minutes, or you might wait an hour.

Purchase your ticket directly from the driver. You might pay the driver in advance to reserve your seat, or you may be asked to just get on and pay when the marshrutka is full and about to leave. Sometimes, on the good marshrutkas, they play movies or Russian television series! You might be in for a treat, or you might arrive late and get stuck with a broken seat and have a sore butt for the next five hours…

Is there a bathroom break?

Yes. And before we forget, there’s a bathroom right in front of the marshrutka waiting area, too.

From our twelve or so experiences taking the marshrutka between Almaty and Bishkek, it stopped at the same spot EVERY time, so there’s a good chance yours will, too. The “Cafe Eurasia” (see photo below) is about 2 hours outside of Bishkek. Located in middle-of-nowhere-Kazakhstan, here’s your chance to use the toilet (40 KTZ or 5 KGS), grab some snacks, and appreciate the endless and featureless Kazakh steppe. 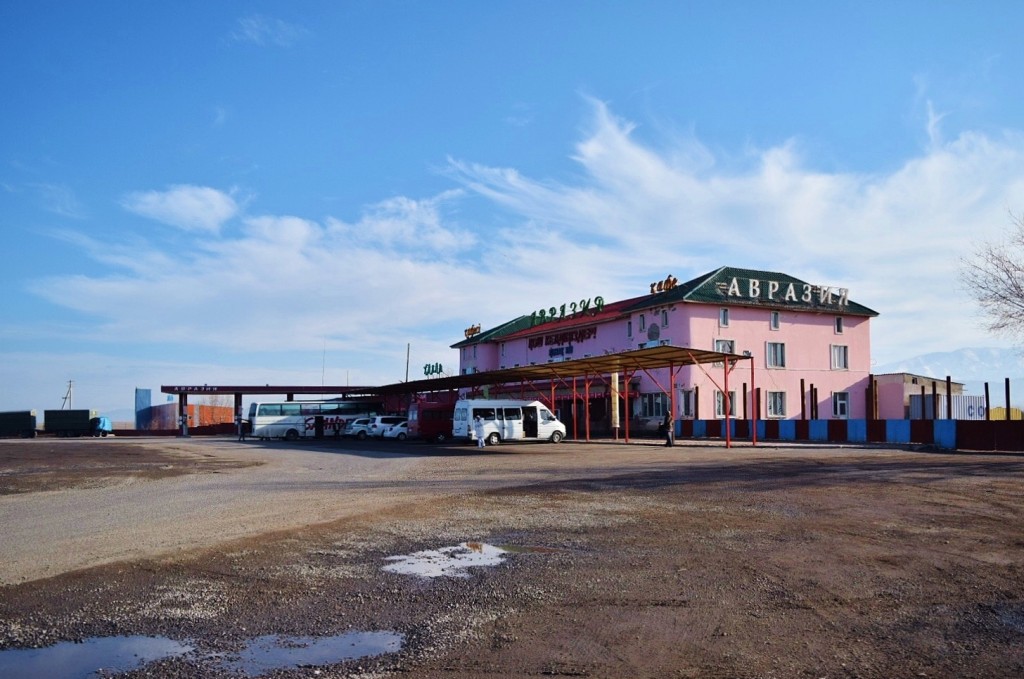 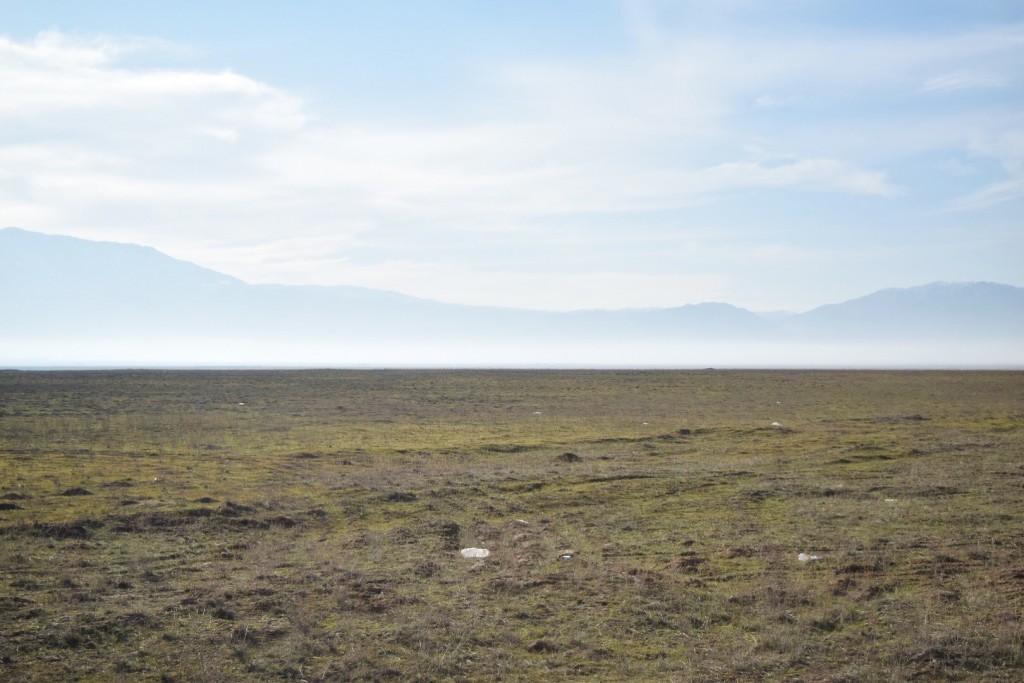 The delightful panorama of Kazakhstan from Cafe Eurasia

Ok, time to cross the border! What can I expect?

The Kazakh/Kyrgyz border is just 21 km from Bishkek, so you’re almost there. At the border, you’ll have to take out all your luggage and take it through the border crossing yourself. Make a note of the number of your marshrutka and/or the appearance of a few of your fellow travelers–this will come in handy a little later.

There might be a lot of people going through the border, or there might not. If there are a lot of people, you may see a lot of lengthy and disorganized queues and experience a lot of pushing and shoving. Just stand your ground and don’t let (too many) people cut in front of you, because they’ll definitely try. Sometimes the sweetest looking grandmas are the worst offenders. We haven’t had many really hectic experiences ourselves and actually it’s usually been pretty quiet and quick when we have crossed. You’ll have to show your passport twice–once exiting Kazakhstan and again when entering Kyrgyzstan. 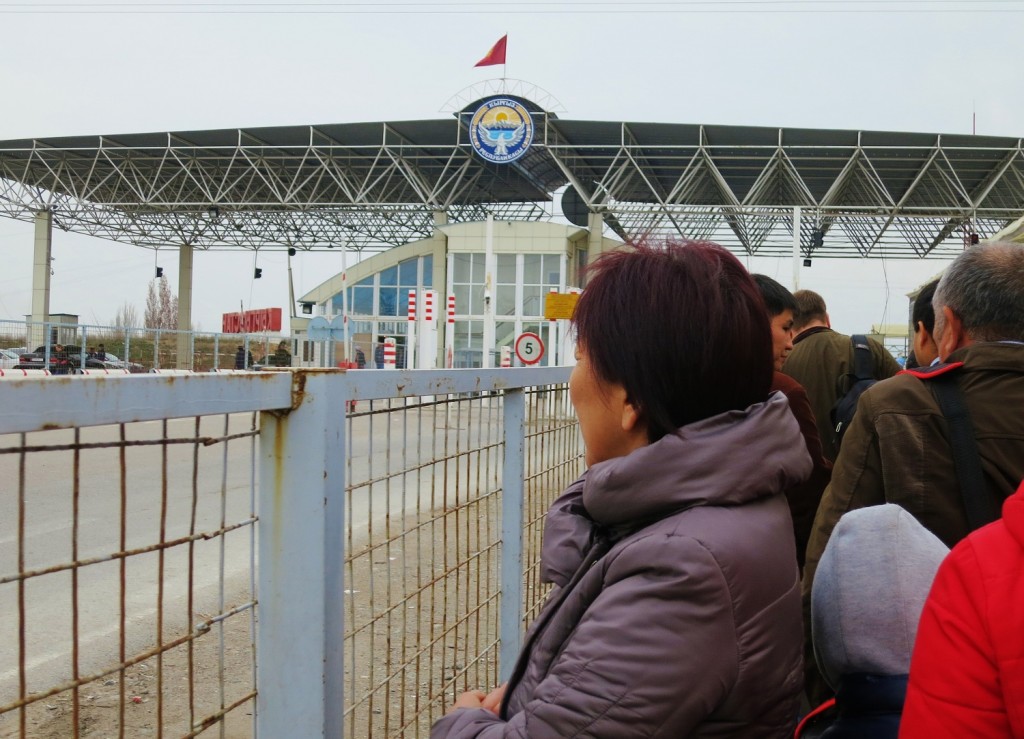 Many citizens including those of the EU, USA, New Zealand and Australia can travel visa-free to Kyrgyzstan for 60 days. Once it’s your turn at the Kyrgyz immigration booth, don’t be surprised if an official asks you if you need a visa to enter the country; this has happened to us many times. Just politely inform them that no, you don’t need a visa, and they’ll believe you. Next you’ll probably be directed towards a room behind the immigration booth with mirrored glass, where you’ll have to give your passport to an official. They do the stamping inside there. Don’t worry–it’ll take a few minutes but it’s part of the official process, and you’ll get your passport back soon enough. 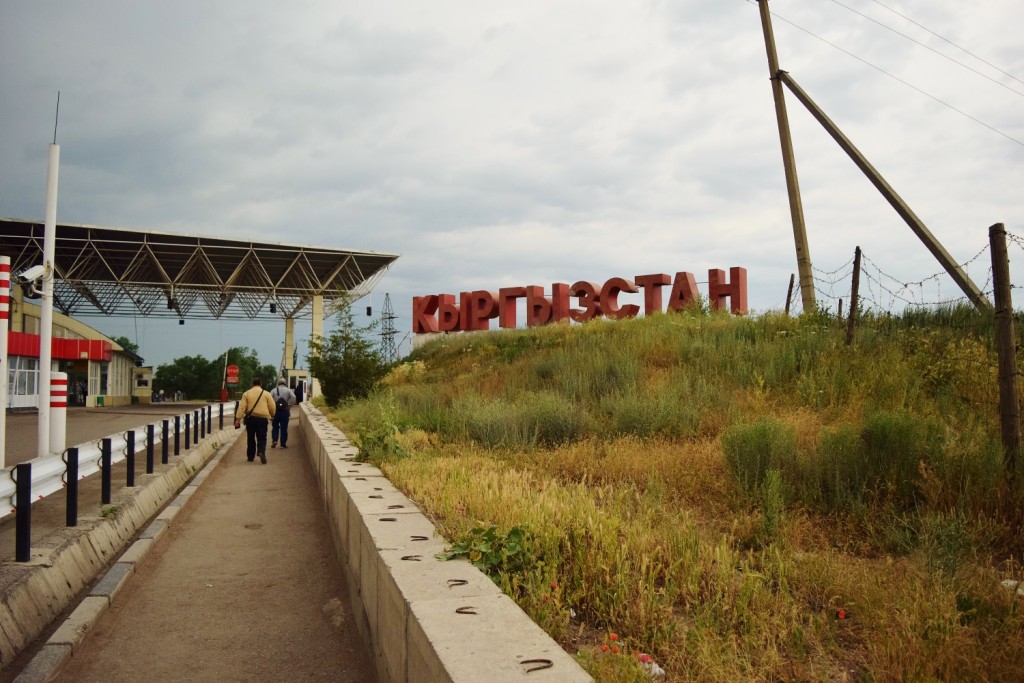 You made it! Hello Kyrgyzstan!

I’m on the Kyrgyz side. Now what?

Marshrutka drivers make a very good effort wait for the all the passengers to return. From the immigration booth you’ll need to continue walking straight about 100 or so meters, past all the men shouting “taxi! taxi!” at you, and you will see a bus stop. This is where the marshrutka will stop to re-collect all the passengers. Here’s where you look for the marshrutka number you came in (you remembered it, right?) or one or two of the people who were on the car with you. When you get back on board, you’ll head straight to the Western bus station (западный автовокзал).

What if my marshrutka leaves me behind? Is there an alternative option for getting to the center of Bishkek?

Don’t worry if you miss your minibus–in fact, if you’re going to center of Bishkek, an alternative option might be more convenient for you!

If you check out the map below, you’ll see that the Western bus station is actually pretty far from the center: 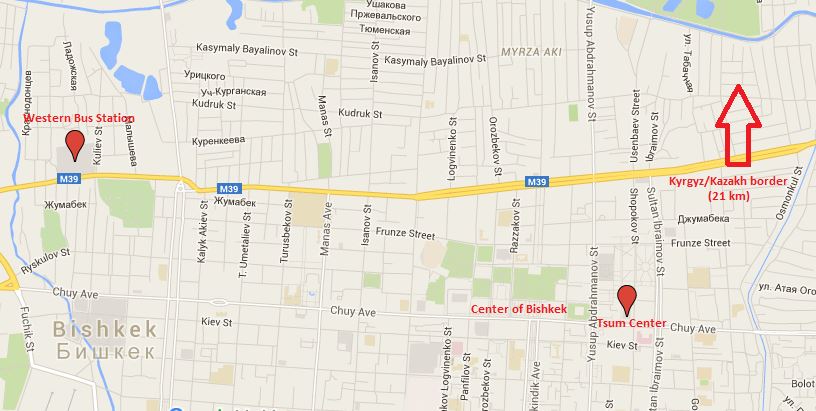 From the border, it takes quite a while for the marshrutka to finally get the to the Western bus station because it stops constantly to allow passengers to get on and off, and it does not pass through the center at all. So once you get to the bus station, you’ll likely have to take another marshrutka to get to the center (or a taxi, since city marshrutkas don’t have space for luggage). Of course it may feel easier and less stressful to get back on the same marshrutka from Almaty, but the alternative option is much faster and takes you right to the city center. (Also note that if you pass through immigration really quickly, you might end up waiting 30 to 45 minutes for all the other passengers to return! This happened to us on one of our first experiences returning to Bishkek and it’s what prompted us to find a more efficient option.)

Marshrutkas number 333 and 285 go the center of Bishkek, with the last stop being the Tsum shopping center. Look for a sign in the marshrutka window with red letters spelling out “ЦУМ” or “ТАМОЖНЯ – ЦУМ” (“таможня” means “customs” in Russian) and you’ll know you’ve got the right one. The price of the ticket is 30 som (about US 40 cents).

Tsum shopping center is right in heart of the city. If you need some time to figure out where to go from here, there are some tasty coffee and pastry stands in front of the main entrance to Tsum center. There’s also a nice little concrete park right next to Tsum center with fountains and some benches. Welcome to Bishkek! 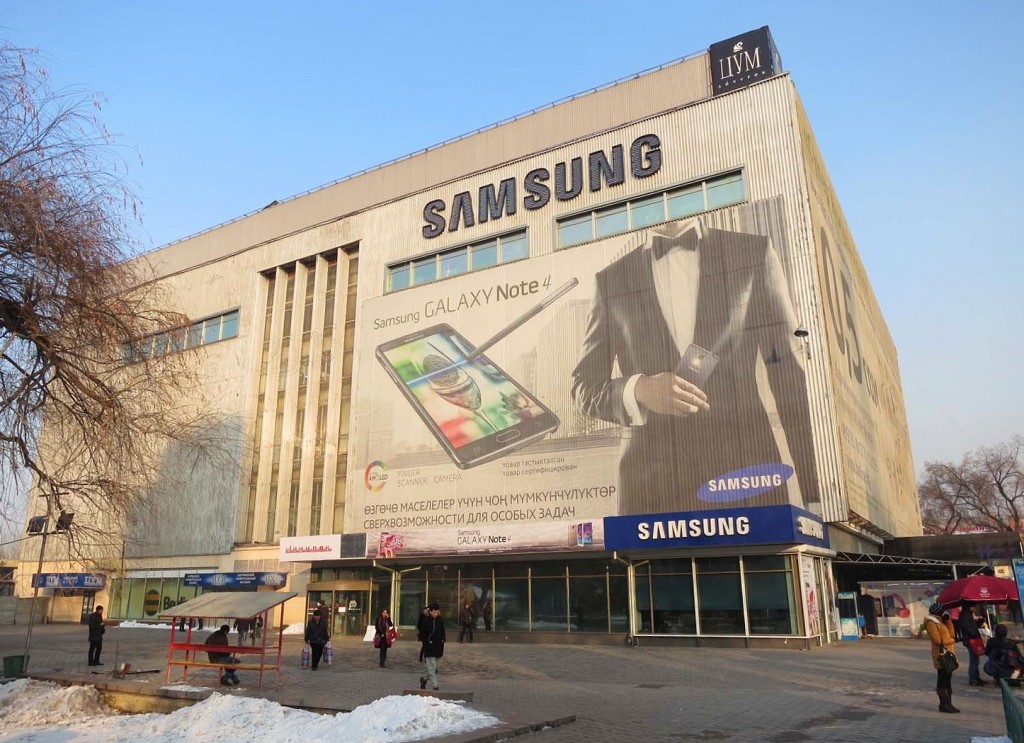 We hope you found this post useful! Don’t hesitate to contact us with any questions, and please let us know if there are any other posts about Bishkek or Kyrgyzstan you’d like to see in the future.

This article has 20 comments