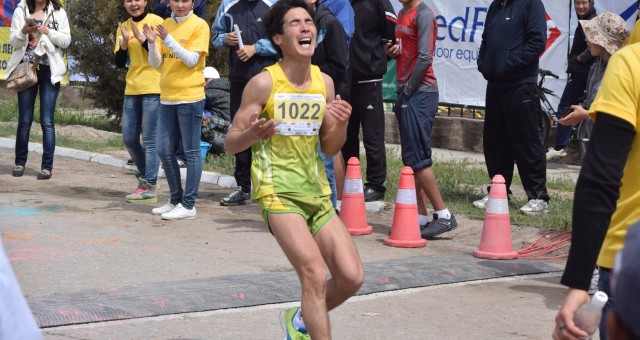 We spent our free time before and after the competition exploring the grounds of the race organization’s partner hotel, the Kyrgyz Seaside Resort. This massive complex is just the kind of thing I love about anywhere, and they’re notably more common in former Soviet republics. Think of three college dorms strung together in a maze of hallways, with five on-site convenience stores, two restaurants, a massive cafeteria, a smattering of souvenir shops and a fully equipped arcade with games that should be in a museum. We had trouble finding our room because there were at least two rooms with the same number–the place was that big.

Cafeteria of Kyrgyz Seaside Resort. Breakfast for the runners.

In the back, the resort eases into the shores of Lake Issyk-Kul over about a kilometer. Halfway through, the path takes you by an abandoned construction site that might have been an aborted addition to Kyrgyz Seaside, or a failed competitor.

The beach itself is wide and scenic, affording views (in clear weather) of Issyk-Kul’s rim of snow-capped mountains, along with closer landmarks like Bosteri’s famous ferris wheel. In early May, the beach seemed as abandoned as the construction site we’d seen before–even the Peacock Egg Motel seemed lost and forgotten.

This weekend’s event was the 4th incarnation of the annual marathon, and the previous three were handled almost exclusively by the Japanese Embassy (according to our source in Cholpon-Ata). There was still a large Japanese presence here, both in cultural performances and in participants.

Caught up in the festive atmosphere, we almost regretted not signing up for the half-marathon or even the full marathon. It turned out to be a good thing all around, because our friends from Empower Blind People, with whom we run nearly every Sunday back in Bishkek, were short a couple sighted volunteers for the 10K. Basically the way it works is we hang onto a cord and run alongside someone who can’t see very well; we also warn about puddles and bumps and other obstacles. Altogether about 15 representatives of the Kyrgyz blind community ran in the marathon, ranging from 5 to 21 kilometers.

We very nearly missed the start of our 10K fun run because we were more focused on the Japanese drummers on stage, but other than that our own race was uneventful. At least, it wasn’t as eventful as the race from a couple years ago when a baby was born right on site.

The course threaded out of the resort grounds through central Bosteri before heading east. Full-marathon runners would reach the village of Temir, over 20km away, before turning around. Those stigmatized with orange numbers, like us, had to turn around just 5K from the start, so we didn’t get to see much of the landscape. We definitely did appreciate the clean, springy air of rural Kyrgyzstan when compared to our smoggy training grounds in the capital.

After 2 hours and 40 minutes, Aman Momunaliev sprinted over the finish line to win the full marathon in standard fashion: run, shout, cry, collapse. He was immediately scooped up by ecstatic friends and family, and I was glad to find out later that he was something of a hometown hero–or at least he was Kyrgyz. In fact, five of the six medalists in the men’s and women’s 42-km competition represented the host country.

The idea of running for fun, or exercise for health, is far from normal in Kyrgyzstan. According to our friends in Bishkek Fun Run, the Soviet generation was accustomed to a regular schedule of calisthenics, but latter generations left the ritual behind and replaced it with the hustling and scrapping necessary to thrive amid the confusion of first-time independence. Organizations like the National Marathon Commission are trying to kill two proverbial birds by simultaneously encouraging activity to improve public health and inviting tourism to strengthen the economy. When one of their own has a strong finish, everyone from the senators to the Japanese drummers can be proud of a job well done.

A reception for athletes (though I humbly decline the title for myself) was held in the back wing of the resort’s massive cafeteria. To my delight, it was basically an all-you-can-eat/drink buffet of Korean salads, traditional Kyrgyz entrees, and beer. For entertainment the same drummers performed to a still-enthusiastic audience, and special awards were given to top finishers in more advanced age groups. Most received framed “diplomas” and a handshake, but the oldest finisher made away with a flatscreen TV. He ran the 10K like us, but he did it with a lot more style, with shiny orange shorts and an entourage of local boys herding him into the finish line.

The marathon’s oldest participant head to the finish

The marathon’s oldest participant gets his prize

The mood was high throughout the event, and I half expected it to evolve into a techno dance party or at least a drunken karaoke session, but even with beer to spare the athletes shuffled out and went home. After unsuccessfully attempting to commandeer a two-liter bottle of белый медведь for a room party, we followed suit and returned to our quarters to watch a static-y, dubbed version of Shrek.

We even left with free souvenir t-shirts and finisher medals that, one day, we can fib about to our grandchildren. All told the weekend was a great success, and I’m especially glad I had the chance to catch one of Kyrgyzstan’s busiest summer resort towns off guard.

Find our more about the Run the Silk Road Marathon here on the official site.