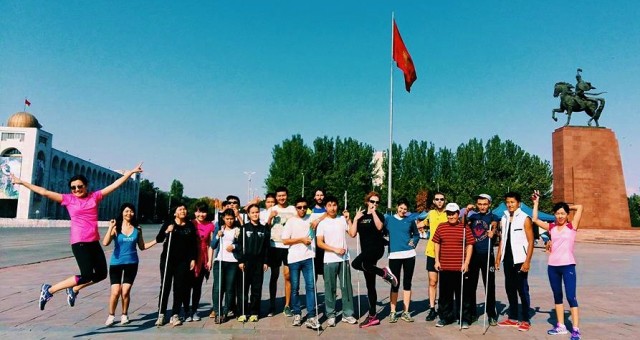 The Bishkek Fun Run club meets every Sunday in Ala-Too Square, rain, snow or shine. Not unlike running clubs around the world, the group is half dedicated to exercise and half dedicated to camaraderie, and is comprised of a revolving set of around 25 characters who may or may not show up for the weekly run–depending on health, hangovers, weather, or mood.

BFR, however, has a unique angle: about half of its members are blind.

Throughout Kyrgyzstan, blind people are almost exclusively dependent on others, and most remain at home through their adulthood. The Bishkek-based Empower Blind People Foundation aims to change that, and they’ve partnered with BFR as one facet of their immersive independence training.

As a sighted runner, it’s my responsibility to stay alongside at least one blind person in order to warn of possible hazards: traffic is a big one, followed in no specific order by stairs, puddles, potholes, and pedestrians.

Today I’m running with Jalaldin Abduvaliev. He’s 22 years old with a ruddy face, a quick smile and an upbeat demeanor–a natural leader among his peers, and a fast runner despite his disability. As we round a corner I point out the stairs ahead. “Yes,” he says, “one, two, three, four…” and he counts his way to the top. We jog and make small talk for twenty minutes or so, well ahead of the rest of the crowd.

Jalaldin grew up in Bagysh, a small village outside Jalal-Abad in western Kyrgyzstan. He rarely left the house and spent most of his time “with the goats and horses.” About a year ago, two women unexpectedly knocked on his door. They were Elnura Emilkanova and Gulnaz Zhuzbaeva, co-directors of Empower Blind People, and they were traveling the country to recruit their first crop of students. An Uzbek feast with Jalaldin at his home outside Jalal-Abad

Nearing the end of the 8-month pilot program, Jalaldin has made remarkable progress. Like the majority of blind people in Kyrgyzstan, he had never used a cane or learned Braille before, and he’s now integrated both into his daily routine–one that now happily involves activities like meeting people, buying groceries, and going for a morning run. After the program finishes, his plan is to continue on with Empower Blind People as a staff member and mentor. With sponsorship, he might even travel to the United States for additional training, following in the footsteps of Ms. Emilkanova and Ms. Zhuzbaeva.

At the end of the road we make a wide U-turn and it’s his turn to warn me: “hole there.” Indeed, a pothole the size of a Volkswagen looms in front of us. I barely jump over it, while Jalaldin nimbly skirts the edge. It’s clear that he knows the terrain. We turn left, and he counts down another set of stairs.

Empower Blind People has prescribed a somewhat lofty goal as the culmination of training with Bishkek Fun Run: to compete in a public 5K race at Lake Issyk Kul taking place next month. I ask Jalaldin if he thinks he’ll be ready.

“I will run the half-marathon. 21 kilometers,” he says without hesitation.

As we enter an open street and near the closing point of our loop, he excuses himself to run faster, leaving me and the rest of the group in the dust. He says he loves the feeling of running fast, that it’s like flying. I close my eyes for a moment to simulate his experience, but near-panic forces them open again. As I watch him sprint toward the finish line, shoulders straight and head tilted upwards, I wonder if he’s somehow lucky: unlike the rest of us, Jalaldin isn’t afraid of what he can’t see.

Jalaldin (right) and the author having a nice chat on a Bishkek park bench.