During the months of June and July, we packed our backpacks, grabbed our sleeping bags, and headed for the pastures—the high mountain pastures of Arslanbob!

We spent much of the summer traveling around Kyrgyzstan with the environmental NGO CAMP Alatoo to grab footage and do interviews (check out our previous post for more info). We’re making seven informational videos about CAMP Alatoo’s key activity areas, and Sustainable Pasture Management was our first one.

We were in good company, joined by CAMP Alatoo’s Pasture Specialist Zhyrgal Kozhomberdiev and other pasture specialists and employees of the State Forestry Service. And of course, CAMP Alatoo’s beloved driver, Uncle Sasha!

Why are pastures important in Kyrgyzstan?

Pastures are the most vital natural resource for Kyrgyzstan. The country is over 90% mountains and agriculture is only possible on about 5-7% of the land; about 80% of this agricultural land is classified as pastures. Moreover, about 64% of Kyrgyzstan’s population relies on livestock for their primary source of income, and pastures are the basis for livestock breeding. Not surprising, proper management of pastures is a big concern for the country.

Historically, the Kyrgyz people adapted their lifestyle to the country’s extremely mountainous terrain, moving to altitudes that are most suitable for grazing at different times of the year. In the winter they stayed in encampments or villages at lower altitudes where there was little snow cover. In the spring they moved their livestock to medium altitudes, and in the summer they arrived in the high mountain pastures. After four to five months in the summer pastures, they spent the autumn season returning to their encampments or villages at the lower altitudes.

The traditional practice of mainly nomadic or semi-nomadic pasture grazing came to end in the Soviet era, during which a more intensive production of livestock developed. This new system led to pasture degradation due to overgrazing. Additional reasons emerged following independence that led to further pasture degradation. The whole system of pasture mobility in Kyrgyzstan became unstable because distant pasture areas were no longer used—the bridges that gave access to distant pastures fell into disrepair—and this led to heavy overconcentration of cattle around low elevation settlements and, consequently, overgrazing and degradation. Over time it became apparent that local populations either have no adequate knowledge about proper approaches to sustainable pasture management systems, or their socio-economic status forces them to use this natural resource unsustainably. Check out this article if you’re curious to learn more about the traditional Kyrgyz method of pasture use.

Are pastures being used sustainably in Kyrgyzstan?

The short answer is, not really—but things are improving. Accessible pastures at low and medium altitudes are overused and degraded, and distant pastures that are no longer accessible due to damaged infrastructure are very healthy (but no one can get to them). This is where CAMP Alatoo comes in. One of Central Asia’s leaders in sustainable natural resource management, they are helping to develop and introduce the practice of participatory pasture management. We joined them on one of their pasture monitoring trips to the Arslanbob walnut forest in southern Kyrgyzstan. Some of the distant pastures were up to 80 km away and only accessible on horseback. We planned to camp in the pastures every night, but it was still too cold and we encountered a lot of rain, so we stayed with a family based in the town of Arslanbob and visited the pastures during the day. The weather in the mountains could change in an instant: one moment it was hot and sunny, and the next moment clouds would roll over the mountains and we’d have to seek shelter from heavy rain. The days were long and our legs were sore, but the beautiful scenery was worth it. And we learned one very useful thing on this trip: when you’re in the mountains in Kyrgyzstan, nothing beats a lunch of lepyoshka paired with tomatoes, cucumbers, and green onions!

View our Flickr album for photos from our pasture monitoring trip to Arslanbob. 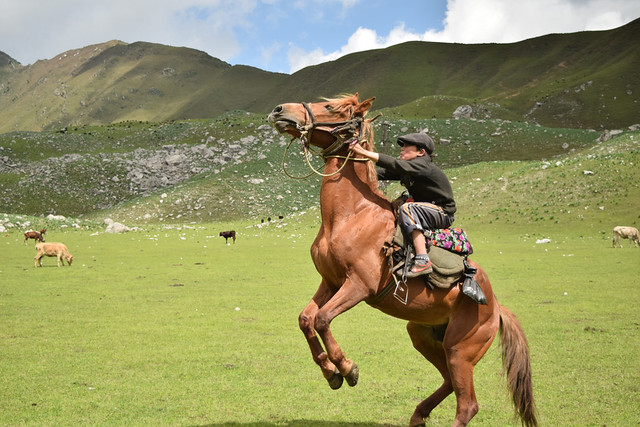