Stay in Kyrgyzstan long enough and you’ll pick up at least one phrase: Кош келиниздер!

This phrase means “welcome” in Kyrgyz. It can be heard at the start of every public event, and seen at the entrance of every school across the country.

The Kyrgyz Mountains Environmental Education and Citizen Science project—also known as KMEECS—is a project with which I (Stephanie) am personally involved in the design, implementation, and monitoring. I’m an intern at CAMP Alatoo in projects on climate change adaptation and conflict management over natural resources, and KMEECS is one of CAMP Alatoo’s climate change adaptation initiatives.

What is the KMEECS project?

This project aims to help students at the secondary level learn more about their local environment and how to interact with it. CAMP Alatoo and the University of Central Asia are working closely with active teachers, students, members of the Ministry of Education, and local and international partner organizations to design a new environmental curriculum that integrates traditional, local environmental knowledge. Students will learn how to analyze and generate data about their local water quality, and this data will be fed into a network of open environmental data.

Why Citizen Science in Kyrgyzstan?

Kyrgyzstan’s education system is hierarchical and centralized. Decisions about school programs, textbook content, and any restructuring of the educational system are made in the capital city, Bishkek, in a top-down process. Teachers and students in remote areas are rarely involved in shaping what is taught. Moreover, curriculum hardly ever takes into consideration the specificities of rural areas. This is especially troublesome when it comes to environmental curriculum, because rural areas are highly dependent on the local environment and different regions have their own observations about local environmental conditions.

In post-Soviet Central Asia, the citizen science approach of having non-scientists participate in scientific research and open scholarly communication is unknown and not practiced. The KMEECS project is a pilot project in citizen science and unique in Central Asia for its exploration of learning and creativity. It will be important to understand and document teacher and student perceptions of the project, barriers to the adoption of the approach, as well as motivation of the participants. The project is exciting because it represents the first time that school communities in remote areas will play a central role in shaping what students learn. For more information about the project, read the full proposal here.

The schools we visited are spread across three districts of Naryn region; sometimes it took thirty minutes to drive from one school to the next, other times it took an hour and a half. I had traveled to Naryn several times with my colleague, Bilimbek, who pitched the project to the schools, but Joe’s first time in Naryn was to interview the teachers for this video. For the interviews, we chose four schools where the teachers are very active, and we paid them a visit—just the two of us. Schools in these parts don’t get many foreign visitors and we received a grand tour of each school, visiting different classrooms and speaking with lots of curious students (many of whom are keenly aware of New York City). It was a great opportunity for me to practice Kyrgyz, which is kind of tough to practice in Bishkek because there are so many Russian speakers. We also had the chance to explore the city of Naryn, which is an interesting place despite having a somewhat boring reputation.

The new curriculum for the KMEECS project will be implemented starting January 2016, so our video is really just about the early stages of the project. We plan to return to Kyrgyzstan in September 2016 to see how the project has progressed and do more interviews, so please stay tuned!

View our Flickr album for lots of great photos of Naryn region! 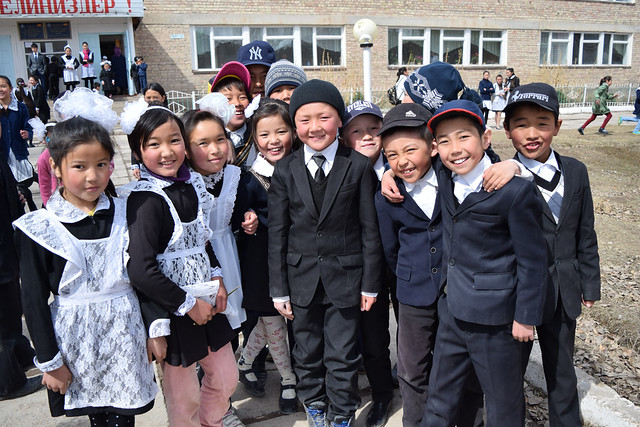